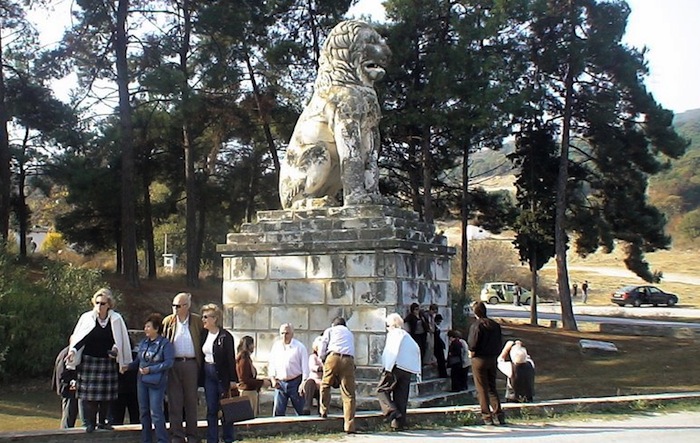 The famed Lion of Amphipolis statue could not have been placed on the Casta hill covering a controversial tomb in northern Greece’s archaeological site, specialists said at a Thessaloniki congress on Saturday, because it is too heavy to have been supported by the naturally formed hill, while the burial found in the tomb most certainly belongs to a different date than the original monument.
Evangelos Kambouroglou, director of the Palaeoanthropology and Speliology Ephorate, department of archaeological research, told the 28th annual archaeological congress on Macedonian and Thracian archaeology at the University of Thessaloniki that according to current evidence, the Lion, dated to the 4th century BC, could not have been placed on the monument.
Kambouroglou said, “the Casta tomb hill is natural, not artificial. It consists of sediments of quartzite sand, clay and sandstone, which give it a limited durability and render it unable to support any weight over 500 tons.” The lion with its base weigh over 1,500 tons, and the conclusion he reached is the same that site archaeologists had already known.
He added that the box-shaped grave found in the last chamber was made at a different time from the main monument, and is “a cheap construction” that does not fit in with the surrounding monument, but did not date it as bone analysis is pending.
Kambouroglou, who has worked closely with chief site archaeologist Katerina Peristeri, said that when he had entered the burial chamber, “there were many human interventions and burnt remains (samples of which have been sent to a Massachusetts institute for analysis), while its roof showed the earth had shifted,” possibly from the same earthquake as that of 597 AD, which is thought to have been so strong it changed the direction of the of Strymon River flow.
University of Thessaloniki physics professor Grigoris Tsokas, also involved in the excavation’s analysis, said during his talk that the construction of the perivolos, or low wall surrounding the monument, has created problems in the earth layering and made it impossible to use imaging technology.
The congress, held annually to present results from excavations and research of sites in northern Greece, is wrapping up its second and last day. On Friday, the presenters had announced that Peristeri would not be making any statements as results of research are not out yet and made special mention of the global media frenzy created around the excavation.
(source: ana-mpa)