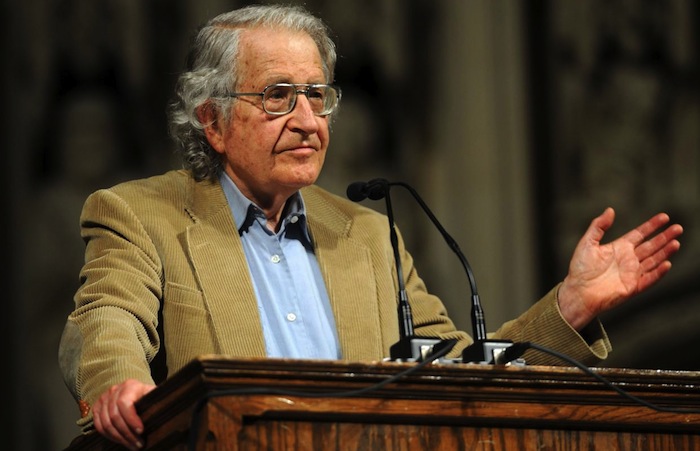 Internationally acclaimed American philosopher and pioneering linguist Noam Chomsky said the European Union’s response to the Greek SYRIZA-led coalition government requests was “extremely savage,” a reaction that Spain’s main opposition party Podemos could face, as it is being projected as the next general election winner. In an interview to American independent news program Democracy Now, Chomsky highlighted that leftist SYRIZA “made a little bit of progress in their negotiations, but not much. The Germans came down very hard on them.”

Further explaining the newly elected Greek government’s negotiations with the country’s loan partners, the philosopher and social activist stressed that Athens was forced to back off from almost all its initial proposals.

“What is going on with the austerity is really class war. As an economic program, austerity, under recession, makes no sense. It just makes the situation worse. So the Greek debt, relative to GDP, has actually gone up during the period of -which is- well, the policies that are supposed to overcome the debt. In the case of Spain, the debt was not a public debt, it was private debt. It was the actions of the banks. And that means also the German banks. Remember, when a bank makes a dangerous, a risky borrowing, somebody is making a risky lending. And the policies that are designed by the Troika, you know, are basically paying off the banks, the perpetrators, much like here. The population is suffering. But one of the things that is happening is that the social democratic policies, so-called welfare state, is being eroded. That is class war. It is not an economic policy that makes any sense as to end a serious recession. And there is a reaction to it – Greece, Spain and some in Ireland, growing elsewhere, France. But it is a very dangerous situation, could lead to a right-wing response, very right-wing. The alternative to SYRIZA might be Golden Dawn, neo-Nazi party,” Chomsky said.