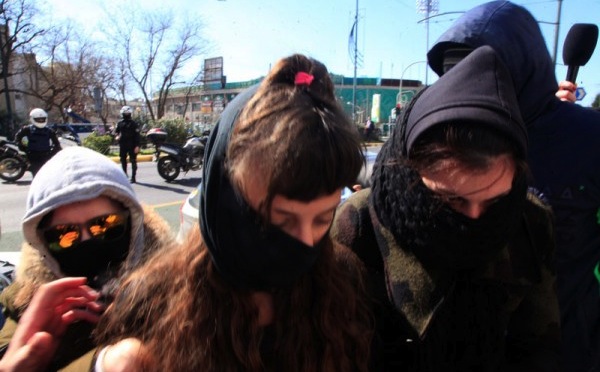 Greek Police on Monday arrested the 60-year-old mother of two detained Conspiracy of Fire Nuclei terrorist group members, Christos and Gerasimos Tsakalos, as well as the latter’s 26-year-old companion for participating in a terrorist organisation.
The two women were arrested earlier on Monday for harboring 22-year-old university student Angeliki Spyropoulou who was captured earlier today at the 60-year-old woman’s house on the island of Salamina, Greece.
The 60-year-old woman and her daughter-in-law will be led before a prosecutor today and on Tuesday will appear before a special Court of Appeals examining judge.
Spyropoulou, allegedly a close associate of convicted terrorist Christodoulos Xeros, was arrested on Monday morning in Salamina, in a house belonging to the 60-year-old woman, where, according to sources, she had been hiding.
Police arrested the mother of the Tsakalos brothers outside the Athens court, where she had been summoned by the special investigating judge to testify on the case of a 36-year-old woman, also arrested in Salamina on Sunday in relation to Xeros’ case.
(source: ana-mpa)