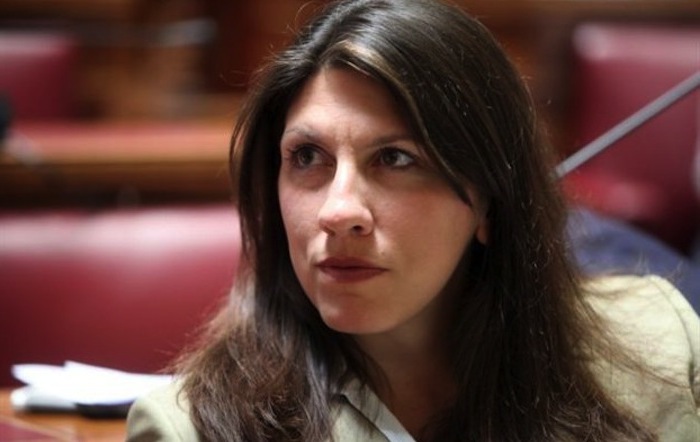 SYRIZA MP Zoe Konstantopoulou was voted as the new Greek Parliament President on Friday, February 6. Konstantopoulou received support from most political parties in the Parliament, with a record 235 votes in her favor, 61 blank votes and 2 null votes. This will be the second time that a woman is elected as the Greek Parliament President, with the first being Anna Psarouda-Benaki in 2004. However, Konstantopoulou also set another record, since the 38-year-old politician is the youngest Parliament President that has ever been elected in Greece.
Zoe Konstantopoulou was born in Athens on December 8, 1976. She is a lawyer, member of the Athens and New York Bar Associations, specializing in National, European and International Criminal Law and Human Rights. She is the daughter of Nikos Konstantopoulos, a Greek politician and lawyer who has served as Coalition of the Left and Progress president.
She studied at Athens Law School, where she received her degree. During her studies she was a member of Athens Law School Students Association Board, a member of European Law Students Association (ELSA), while she also participated in an Athens Bar Association Program that provided free legal aid in cooperation with the University.
Konstantopoulou was first elected in the Greek parliament in 2012 with SYRIZA in the First Athens District. She was very popular, receiving 11,727 crosses in the elections of May 2012 and placing first in her party’s ballot, while in June 2012 she was re-elected.
Konstantopoulou recently got married to Apostolis Mantis, after a ten-year relationship. Despite her party’s beliefs, Konstantopoulou was married in a church, in a very traditional Greek wedding ceremony, on September 27, 2014.
Konstantopoulou has been in the center of media attention multiple times since her election in the Greek Parliament, mostly due to her intense quarrels with members from other parties.