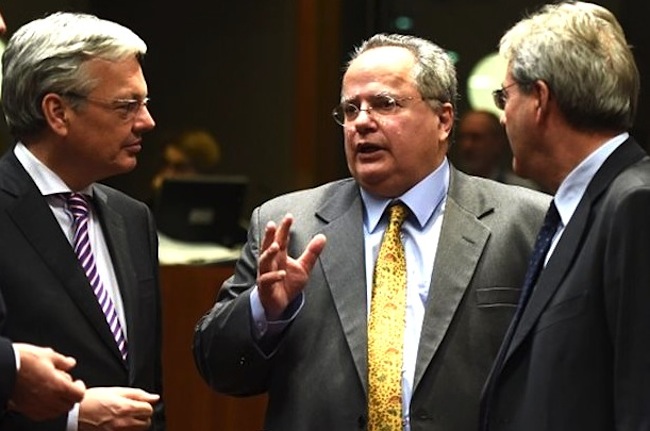 European Union Foreign Ministers have decided in a Brussels Council today to extend targeted sanctions against Russia by six months, until September, although they showed limited appetite for broader and stricter measures imposed on Moscow. The sanctions are imposed due to Russia’s alleged involvement in the Ukrainian conflict.
On his behalf, Greek Foreign Minister Nikos Kotzias underlined that Greece insisted on removing a passage from the draft proposals, which would have imposed new sanctions on Russia. Greece also insisted that the final communique does not put direct blame for the Ukrainian conflict on Russia. The decided extension suggested that Greece’s new government might be openly skeptical of sanctions on Russia, although it would not break EU unity on the matter. Furthermore, Kotzias highlighted that he was happy to sign the EU decision, since the bloc was not immediately moving toward new economic sanctions.
Commenting on the issue, the High Representative of the European Union for Foreign Affairs and Security Policy, and Vice President of the European Commission, Federica Mogherini, said that “of one thing I can be happy tonight, and that is that we kept our unity which is, as we have always said, our strength,” adding that Kotzias’ “attitude was extremely constructive.” At the same time, the Greek Foreign Minister clarified that “I do not know what we are going to say in future negotiations. I am not excluding anything.” Greece was prepared to use its veto to block new sanctions if it felt they were not in the country’s interests. “When sanctions are imposed, you must be aware of the consequences,” Kotzias concluded, explaining that the sanctions created a series of financial problems in Greece.
The European Foreign Ministers also issued a statement criticizing Moscow for “continued and growing” support to the Ukrainian rebels, saying Russia shared “responsibility” for the recent surge in violence, although the statement’s language was softened from an earlier version, partly due to Greek concerns.
The first sanctions were adopted in 2014 and targeted specific individuals accused of involvement in the ongoing conflict in eastern Ukraine. It was set to expire in March 2015 and included travel bans and economic restrictions for 132 people and 28 entities. European Union officials will have until February 9 to propose new targets to be to hit with an asset freeze and travel ban.
“But now – I cannot say that I am happy to announce that we have taken these decisions, because I think the situation in Ukraine is not giving us any space for being happy, of anything – one thing I can be happy of tonight, is that we kept our unity. This is, as we have always said, our strength, and we have shown that the European Union is ready to take further measures and to prepare for the measures for the weeks to come, if the situation not only does not improve, but gets worse, as was the case in the last days,” Mogherini concluded.
The Greek government declared satisfied with the Council’s outcome.