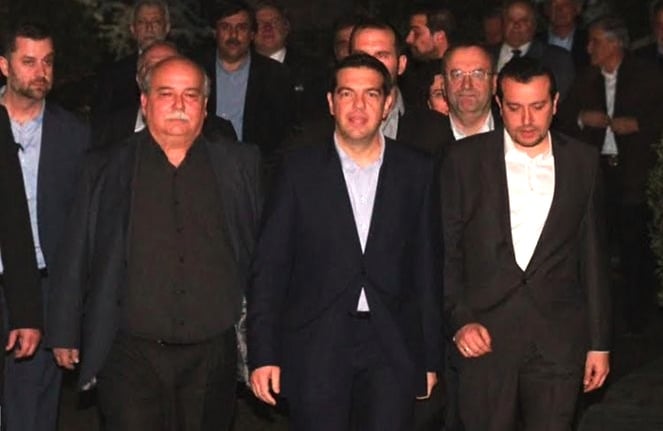 Greek main opposition New Democracy (ND) spokesman Costas Karagounis on Tuesday commented on the composition of the new cabinet unveiled by Greece’s Prime Minister Alexis Tsipras, welcoming its relatively small size of 40 ministers but expressing “deep concern” about some of the individuals included in its ranks.
According to Karagounis, the new government lacked direction and struck “delicate balances” between the various component factions within and outside SYRIZA.
“We express our deep concern over the participation of people in areas of responsibility that have expressed dangerous positions on growth, privatizations, cancelling investments, restoring asylum of lawlessness in universities and even opening borders for every illegal migrant,” he said.
He also expressed ND’s objections to the abolition of the Tourism and Shipping Ministries in the new cabinet, which he said were crucial for growth and made the biggest contribution of GDP in the last two and a half years. ND also slammed the demotion of the Rural Development Ministry as “inconceivable” and said that SYRIZA’s proposed candidate for Parliament President “should give a signal for consensus and synthesis between all Parliamentary groups and the candidate clearly does not have these traits.”
“ND will be present to judge, evaluate but also avert policies that are damaging for national interests and Greek citizens, especially in the crucial times that are coming,” Karagounis said.
The new government unveiled on Tuesday was “bad” with a “very few good exceptions” and built on the “unprincipled alliance” between Tsipras and his junior coalition partner, Independent Greeks (ANEL) leader Panos Kammenos, “To Potami” party said in an announcement.
It criticized the “sharing out” of Ministries along the well-trodden “old-party recipe,” including everything from former ND Ministers to “known to be inadequate party employees” and expressed particular surprise at the choice of Zoe Konstantopoulou as candidate for Parliament President.
“Instead of choosing an individual that can bring about synthesis, the selection was for the perennial protagonist of Parliamentary squabbles,” the announcement said.
“One would have expected that a party that spent 2.5 years as main opposition and demanded elections on the spot would have prepared better for its historic opportunity,” it added.
(source: ana-mpa)