GRNews
GreekReporter.comGreek NewsEconomySYRIZA MP Dragasakis: We Will Not Accept the February 28 Deadline

SYRIZA MP Dragasakis: We Will Not Accept the February 28 Deadline 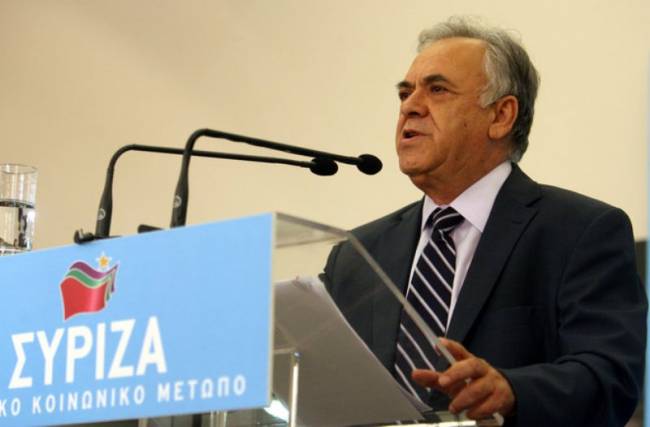 A SYRIZA government in Greece will demand time to serve democracy, therefore the party will decline the February 28 deadline, when the Greek support program expires, said earlier today SYRIZA MP and parliamentary candidate Giannis Dragasakis. During an interview with “Vima FM,” the main opposition MP underlined that SYRIZA will ask for time in order to prepare its own proposals concerning the new financial objectives frame, the reforms’ national plan and the Greek debt.

When asked to particularize that time, Dragasakis replied that this is something to be put under discussion, while he wondered “Is it possible for a new government to make concrete proposals without having the public treasury elements in its hands?” Furthermore, Dragasakis underlined that the negotiation has already began, although the country is trapped as it is getting loans to repay old debts. “We should escape this trap,” he added. Regarding the policy followed up until today, he said that it has been destructive, explaining, though, that SYRIZA is open to hear a different opinion on the matter.

“On Sunday, the Greek people will have the chance to evaluate the progress so far” he said. “But a question is raised whether the principles of democracy and popular sovereignty are still in action”, he noted when asked to comment on a possible refusal from the European partners to negotiate with Greece. “From Monday, we will have a different day, a government with its own program and not a copy of the program imposed by the Europeans,” Dragasakis highlighted, adding that SYRIZA does not stand alone, neither Greece.

Finally, answering a question on whether SYRIZA will table the issue of the forced Nazi occupation loan, he pointed out that the new government will primarily deal with the European problems, while the rest will depend on the progress of negotiations.