SYRIZA Leader: Our Power is the People's Trust 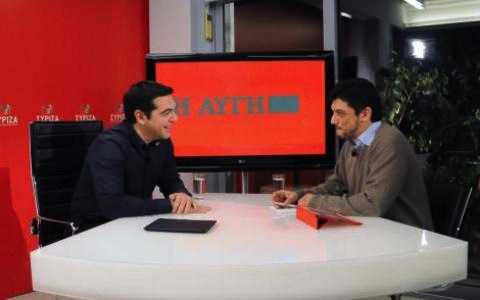 “The participation in the elections concerns all the generations and all the ages. It concerns the future,” SYRIZA leader Alexis Tsipras said at an open discussion-interview organized by Avgi newspaper on twitter.
Tsipras said that “the government is afraid of the young and for that reason did not allow the 18-year-olds to vote” and called on the young to understand that this is a historic opportunity. More specifically, he called on all those who will vote to also vote for those that have been excluded.
He also referred to the tax policy saying that a broadening of the tax base along with a stable and just system without an increase of the tax rates is necessary. He was also clear on the primary residence foreclosure issue, saying “no primary residence foreclosure.”
Regarding the private debt to the State and social security funds settlement, he stated that according to the Thessaloniki program, the ceiling of the installment will be at 30% of the income adding that incentives will be given to workers for the management of bankrupt enterprises.
Tsipras pledged that SYRIZA will put a halt to the party of the constructors and “national suppliers.”
At a query regarding the private TV stations, Tsipras said that “those who want to have private stations will have to dig in their pockets.”
On the privatizations, SYRIZA leader noted that “the last seven years” privatizations were a sell-out in order for interests to be served… they did not assist in the reduction of the debt” and called Hellenic Privatizations Fund (TAIPED) “a nursery of scandals” adding that important utilities (communications, water supply, electricity) must be under the control of the State.
Regarding the public administration, he said that there will be an end to clientelism adding that a change of culture is needed. “We must show confidence in the public administration and there will be a decongestion of the crowds of advisers. We will become a normal state,” he said.
On the migration issue, Tsipras said that its tackling is a European co-responsibility. Moreover, he stated that a SYRIZA government will abolish the current reception centers and hospitality centers at the entrance points of immigrants will be created. There will be respect to the international treaties for asylum and nationality will be granted to those children born in the country.
Tsipras noted that the distinct role in the State-Church relations will benefit both sides and praised Archbishop of Athens and All Greece Ieronymos.
Regarding the role and the operation of the police, Tsipras said that “we need better policing, the police to face and prevent the crime but we do not want a police state.” He clarified that a SYRIZA government will disarm the police officers that come in contact with demonstrators while special units for the prevention of violent incidents will be established.
On the public healthcare system, Tsipras said that its support is of strategic importance. He underlined the need for targeted hirings in the specific sector because medical and nursing staff is needed to cover the needs in hospitals and health centers.
Regarding the high security prisons (so-called prisons C) he noted that the law for this kind of prison is against the Constitution and the principles of the rule of law. He also referred to total interventions in jails because saying, “the conditions are dramatic and they make you feel embarrassed.”
On the Palestine issue, he said “Relations of friendship and cooperation with all the people. Recognition of the rights of the Palestinian people. Moreover, re-warming of our relations with the Arab world. Greece is to become the bridge of friendship between Europe and the Arab world.”
Asked on former national carrier Olympic Airways, Tsipras said that what happened with Olympic was a national crime. The re-establishment of the national carrier is currently not possible.
To a question if he will continue to give interviews on the Internet if he is elected, Tsipras answered positively noting that “our power is not the TV channels nor will they be the day after. Neither the public nor the Greek public television. It is the people’s trust.”
Finally, referring to Prime Minister and New Democracy (ND) leader Antonis Samaras’ recent interview to the public television (NERIT), Tsipras said this constitutes a downgrading of journalism adding that Mr. Samaras refuses the public debate because he does not have arguments.
After the end of the web interview, Tsipras visited SYRIZA’s central campaign pavilion that was inaugurated on Wednesday.
(source: ana-mpa)