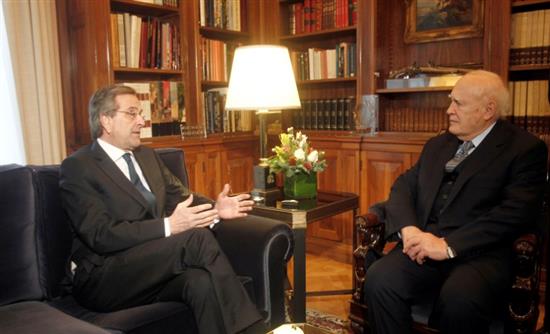 The Greek Prime Minister, Antonis Samaras, received the outgoing President of the Hellenic Republic, Karolos Papoulias, at his office earlier today in order to agree on the current Parliament’s dissolution, ahead of the upcoming snap general elections, that according to the Greek Constitution must follow the Parliament’s failure to elect a new Greek President.

“The big moment has arrived.” This was the phrase Mr. Papoulias welcomed Mr. Samaras with, adding that he hopes “everything will go well.” On his behalf the Greek Premier, underlined once again that the Greek people did not want elections. “They are unnecessary. They are the result of partisan self-interest,” “when it comes to the security and stability of the nation, the battle is about truth and responsibility. In this battle, it is not the political parties that come first, but the nation, particularly as Greece’s remainder in Europe is at stake.”

It should be noted that the Greek Premier officially requested from the President, the dissolution of the Parliament as soon as possible and the elections to be held on Sunday, January 25. Within the day, Mr. Papoulias is expected to issue a presidential decree ordering the Parliament’s dissolution and approving the given date as the date the next general elections will be held. In addition, within the first days of the new cabinet a new Presidential election should be held for the successor of Mr. Papoulias.