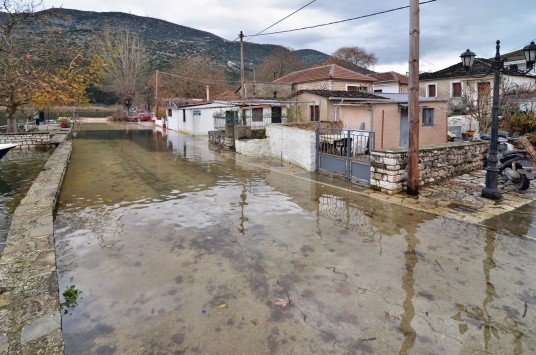 Extreme weather conditions have hit the whole country and especially northern Greece. In Ioannina, houses were damaged and roads were flooded, while the Ioannina Lake water levels appear to have risen significantly in just a few hours.
As a result of the water level rise of the lake several houses on the unnamed island of Ioannina Lake have suffered damages. Many courtyards have flooded and the island residents are doing everything in their power to keep the situation under control.
Locals are complaining that the same problems occur every year, due to the fact that the Perama dam is never opened on time. If the lake has a low water level, then it takes up to one month for it to overflow, because the ground absorbs part of the water. If, however, the water level is already high then it only takes one week for the water to reach the houses of the unnamed island.
According to an island resident the Greek Rural Development Ministry employees that are responsible for the Perama dam should open it proactively in order to avoid such situations.
The unnamed island of Ioannina Lake is the only inhabited island in the world that does not have a name. The verdant island of 200 square kilometers is home for more than 300 people and is known for its traditional Epirus stone-built settlement. Visitors can reach the island by small boats departing from Ioannina every 30 minutes for a journey of only 10 minutes.