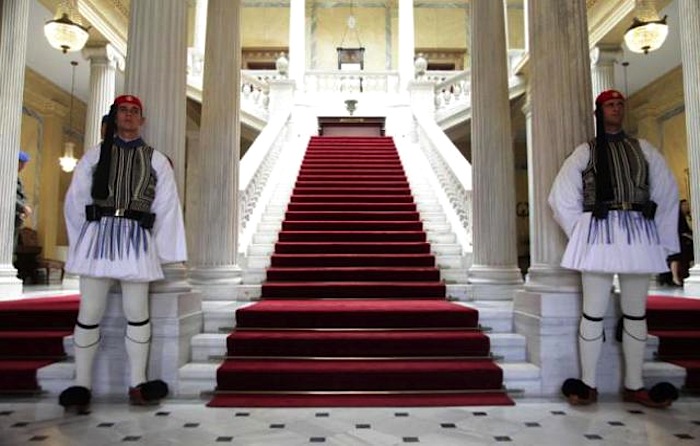 On December 17, two months ahead of schedule, will finally be held the first ballot for the election of the new President of the Hellenic Republic, government spokeswoman Sophia Voultepsi announced earlier today.

According to Voultepsi’s written announcement, Greek Prime Minister Antonis Samaras and government Vice President Evangelos Venizelos, after informing the President of the Hellenic Republic, Karolos Papoulias, requested from Parliament President Evangelos Meimarakis to move the process of the presidential election as soon as possible so that the vote be held on Wednesday, December 17.

The government spokeswoman also referred to the outcome of today’s critical Eurogroup, stressing that a “page break” was agreed along with Greece ‘s transition into the new institutional framework of the precautionary credit line.

At the same time, Voultepsi launched an attack on main opposition SYRIZA, saying that it “undermines the country’s negotiation position,” underlining that the “political uncertainty must end now.”

Prime Minister and President of New Democracy Antonis Samaras, and government Vice President and President of PASOK Evangelos Venizelos, met today and discussed the negotiation developments with the lenders and within the political scene after the debate and vote on the budget.

The Eurogroup has already acknowledged the country’s efforts and achievements and agreed on the “page break” and Greece’s transition in the new institutional framework of the precautionary credit line (ECCL). This is a very positive development and also the country’s thorax against the markets.

The Eurogroup also agreed that all relevant procedures must be completed within the first two months of 2015.

Therefore, the coming period is critical; for the completion of the new agreement and the settling of all issues, including the debt issue.

Greece must be fully prepared to line up all the forces and all the arguments in a climate of national rally and political stability.

Unfortunately, the open and unconcealed instigation of the opposition to Members of the Parliament, to prevent the election of the President of the Hellenic Republic and lead the country to early elections, undermines Greece ‘s negotiating position and transmits messages of uncertainty to the markets. In addition, it is undermining the national economy, with whatever this entails for businesses and households, workers and unemployed.

Prime Minister Antonis Samaras and government Vice President Evangelos Venizelos, after informing the President of the Hellenic Republic, requested from the President of the Parliament to move the process of the presidential election as soon as possible, so that the vote be held on Wednesday, December 17. 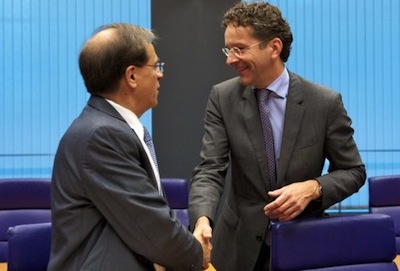 The Eurogroup statement on Greece:

The Eurogroup welcomes the recent positive macroeconomic developments in the Greek economy. The improving growth prospects for Greece reflect the remarkable adjustment efforts undertaken by the Greek citizens and authorities. The economic adjustment program is starting to pay off and is proving to be a cornerstone for Greece’s return to sustainable and balanced growth and job creation.

We also welcome the progress made by the Greek authorities in order to address the outstanding issues to conclude the fifth review, as assessed by the European Commission (EC), the ECB and the IMF. However, we take note that despite this recent progress, the current review can no longer be completed before the end of year. Therefore, the current review will need to continue into early 2015 until the staff-level agreement is reached and all prior actions are deemed to be fulfilled. This would pave the way for the disbursement of the outstanding €1.8 billion under the current EFSF program.

Therefore, the Eurogroup would be favorably disposed to a request by Greece for a 2-month technical extension of the current EFSF program. The Eurogroup asked the institutions to prepare a factual report on the state of play of the current review and gave a mandate to the EWG to report to member-states in order to launch the national procedures with a view to reach a final decision on the extension of the current EFSF Master Financial Facility Agreement by the EFSF Board of Directors by the end of the year.

Moreover, we were informed by the EC, the ECB and the IMF that it would be prudent to extend the availability period of the EFSF bonds in the HFSF buffer until the end of February 2015, in parallel to the extension of the EFSF program. The Eurogroup looks favorably at such an extension. Following a request by Greece, the EFSF can make the necessary arrangements before the end of the year.

The Eurogroup urges the Greek authorities to ensure a rapid and full implementation of all reform measures necessary to conclude the fifth review. These reforms are key for the Greek economy’s smooth functioning and will contribute to bringing about sustained growth and employment, and to secure the sustainability of public finances, thereby fully delivering on the program objectives.

Euro area member-states remain favorably disposed to granting Greece an ESM precautionary credit line (ECCL), if Greece were to request this, and subject to the finalization of the reform measures that are still pending under the current review, continued involvement of the IMF, and the completion of relevant national and EU procedures.