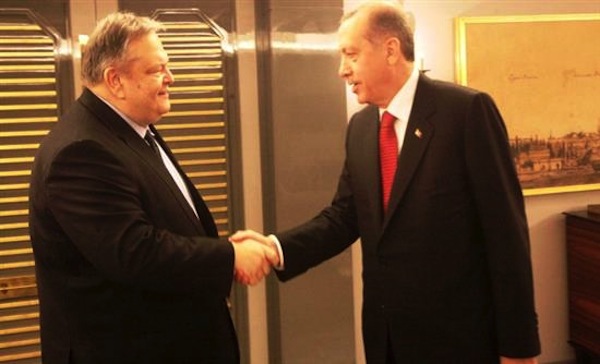 Greek Government Vice President and Foreign Minister Evangelos Venizelos met with Turkish President Recep Tayyip Erdogan in Istanbul on Saturday, in a “very positive climate.”
The issues discussed included the Cyprus problem, especially “to put an end to the violation of sovereign rights of the Republic of Cyprus and the presence of a Turkish research vessel in Cyprus’ Exclusive Economic Zone,” according to Venizelos’ statements.
Earlier on Saturday, Venizelos had met with Turkish Foreign Minister Mevlut Cavusoglu in Ankara, ahead of the third Greek-Turkish High Level Cooperation Council that will be held in Athens on December 5 and 6.
Following the meeting with Erdogan, the Greek Finance Minister said, “I think that there are solutions which are entirely in agreement with international law and respect the rights of the Republic of Cyprus, and allow the restart of talks” between the Greek-Cypriots and the Turkish-Cypriots. “This will create a better climate for Greek-Turkish relations and stabilize the wider [geographic] area,” he added.
Venizelos noted that Erdogan is “a political leader with great experience and power” and “understands very well that Greece is Turkey’s secure and reliable neighbor.” He added that “Turkey is facing a crisis along its entire borderline, therefore it is very important that there is stability in Greek-Turkish relations and a field of joint initiatives.”
The Council will provide the opportunity to take significant steps in economic and social issues, but there is a “hard core of issues” and a legal disagreement on delimitating the maritime zones between Greece and Turkey, as well as issues that have remained open for decades, which need resolution.
In terms of minorities in each country, Venizelos said that Greece “does not place [the issue of protecting minorities] on a reciprocity base: Each country has the constitutional obligation and an obligation based on international law – especially the European Convention on Human Rights or more specific treaties like the Treaty of Lausanne – to respect minorities’ rights and human rights in general. This is our position, which we have stated both publicly and privately.”
(source: ana-mpa)

Turkey charged on Tuesday that Greek fighter jets had “harassed” its research vessel Cesme while it sailed in the Northern Aegean.
Greece