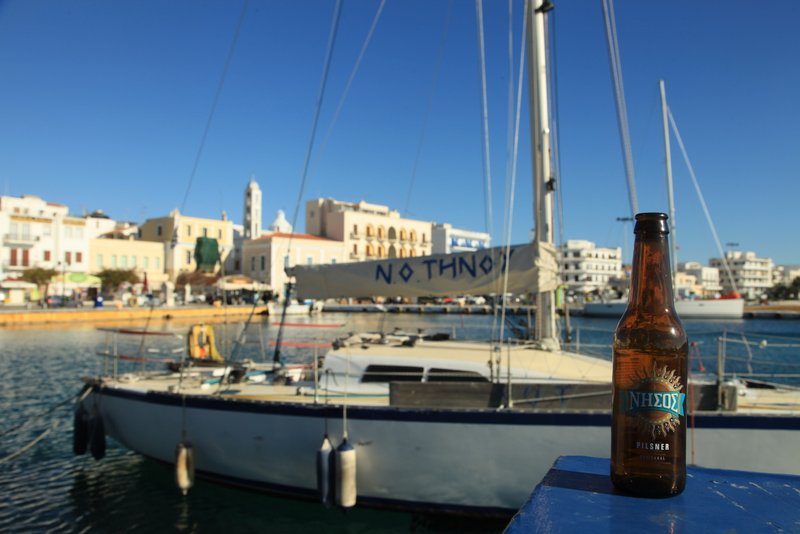 Greek beer “Nisos” won the silver European Beer Star Award in the category Bohemian Pilsner in an international competition that took place in Bavaria, Germany, yesterday. This is the first time ever that a Greek beer wins such an award.
Nisos (island in Greek) is brewed on the island of Tinos. The microbrewery is in the Vaya village and it was founded by Alexandros Kouris, Maya Tsokli, Elina and Costis Dellis. Tsokli is a well-known Greek journalist and travel commentator. The first batches appeared in liquor stores, bars and restaurants in April 2013. Since then, its flavor has won many beer drinkers in Greece.
The founders say that Nisos was inspired by the rich colors and flavors of the Greek islands, the golden sun, the blue sea and sand of the Aegean Sea. It is also the work of local artisans, using the finest quality ingredients growing in the Greek soil.
In the Bavarian competition, 1,613 beers from 42 countries from all continents were tasted. The evaluation was conducted by 105 judges who undertook blind tasting. The contest judges evaluated taste, color, flavor, and overall impression.
Competition was hard, as the 17-month-old microbrewery had to compete against beer makers with hundreds of years of tradition. However, the Greek pilsner excelled against tough competitors from the Czech Republic, Germany and the U.S.
Kouris and Tsokli said that they went to receive the award as ambassadors of Tinos and Greece and not as entrepreneurs. They went on the podium wearing T-shirts with the Greek flag and the word ‘Tinos’ written on them.
After receiving the award, Kouris stated, “The whole Nisos team is especially proud and excited. We have been on the market for only 17 months and we dared enter the competition for the experience of participation. We knew that we make a good beer but did not expect to take second place on the podium.”
“Now, for the first time, Greece is placed on the world map of top beers. Incredible but true,” Kouris concluded.