GRNews
GreekReporter.comAustraliaGeorge Souris Confirms He Will Not Run in 2015 Elections

George Souris Confirms He Will Not Run in 2015 Elections 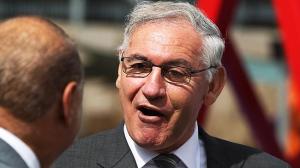 Former New South Wales tourism, hospitality and racing minister George Souris has confirmed that he will not recontest his seat in next year’s parliamentary elections. Mr. Souris, the Nationals MP for the Upper Hunter, will have served a total of 27 years in the NSW Parliament.

The 65-year-old was disappointed to lose his place in Mike Baird’s cabinet when the premier reshuffled his ministers in April.

“I was in the ministry and I was dropped from the ministry. I don’t want to sit on the back bench with the tag ‘was dumped’,” Mr. Souris said of his reason for leaving politics.

“I was removed not for stuffing something up, but removed for generational change.”

He added that it was Deputy Premier Andrew Stoner, the Nationals leader, who dumped him from cabinet, not Mr. Baird.

Mr Souris has expressed interest in pursuing a business career after parliament. He does not plan to seek opportunities until after March, as he is determined to serve his final six months in politics “unencumbered.”

Mr. Souris said the “most difficult policy area” he had been involved in was alcohol-related violence. “The government decided upon a series of measures over a three-year period, including lock-outs, that I believe have contributed to the very substantial reduction in violence statewide,” he said.

While in opposition, Mr Souris had secured an agreement between the Liberals and Nationals and Clubs NSW. The deal gave $350 million in tax relief to the clubs and saved jobs when the O’Farrell government came to office.

Mr. Souris is a former leader of the NSW Nationals. “In the National Party, anyone and everyone, including the son of migrant parents, has a place and a path,” he said. Acting NSW Premier Gladys Berejiklian has said that Mr. Souris has made an enormous contribution to NSW politics.

“George is a highly respected member of the NSW Parliament and spent the majority of his parliamentary career on the frontbench – a remarkable achievement,” she said. Nationals Roads Minister Duncan Gay agreed that Mr. Souris was “widely respected across party lines” and a pioneer, being the first Greek Australian MP in NSW.