Is the Mother of Alexander the Great in the Tomb at Amphipolis? Part 2

By Andrew Chugg*
I wrote my initial article on this question on the morning of September 6th (a day before the announcement of the discovery of the caryatids) and I drew a number of inferences from the evidence then available:
1) Sphinxes decorated the thrones found in the tombs of two mid to late 4th century BC queens of Macedon, one of whom was Alexander’s grandmother Eurydice I.
2) Greek mythology recognized Hera the wife of Zeus as the mistress of the sphinx: the 4th century BC Macedonian kings identified themselves with Zeus, so it would make sense for their principal queens to have identified themselves with Hera.
3) The female sphinxes at Amphipolis have their closest parallel in a pair of female sphinxes found by Mariette at the Serapeum at Saqqara, which were dated to the reign of the first Ptolemy by Lauer & Picard, mainly on the basis of an associated inscription: the Serapeum at Saqqara is also a strong candidate for the site of the first tomb of Alexander the Great
4) There are strong parallels between the façades of the tombs of Philip II and Alexander IV at Aegae and the reconstructed façade of the lion monument that stood atop the mound at Amphipolis.
5) The paving in the tomb at Amphipolis closely matches paving in the 4th century BC palace at Aegae.
6) The 8-petal double rosettes in the Amphipolis tomb have an excellent match on the edge bands of the gold larnax of Philip II.
7) The evidence therefore favors an important queen being entombed at Amphipolis: Olympias, Alexander’s mother, and Roxane, Alexander’s wife may both have died at Amphipolis and are the only prominent queens that accord with the archaeologists’ firm dating of the Amphipolis tomb to the last quarter of the 4th century BC
In this extension of my first article I will describe how the newly discovered caryatids, shown in Figures 1 and 2, may be fitted into the scenario and I will explain why the symbolism of a lion particularly suits the case of Olympias. Finally, I will discuss a few objections to the candidacy of Olympias. 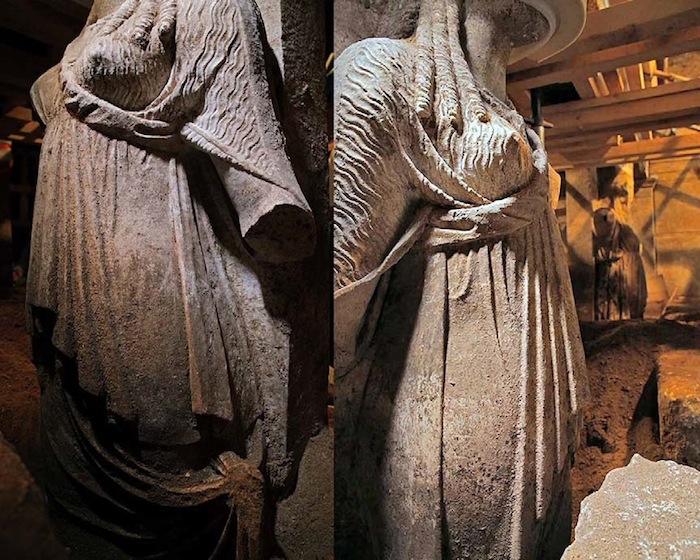 Caryatids, meaning in general pillars formed from sculptures of female figures, are extremely common in Greek and Roman art and architecture. The twisted locks of hair coming forward over the shoulders of the Amphipolis caryatids are a common feature. However, their stance and in particular the arrangement of their arms is slightly more distinctive.
They stand facing forward either side of a doorway as near mirror images of one another and they each have the arm on the side of the doorway upraised and the opposite arm lowered and slightly lifting the dress.
The closest parallel to the Amphipolis caryatids that I have yet seen is a caryatid from Tralles (modern Aydin in Turkey) shown in Figure 3. It probably dates to the early Roman period (1st century BC). However, Roman period caryatids were very often closely based on Classical or Hellenistic prototypes, so this says nothing about the date or precise inspiration of the Amphipolis caryatids.

A more instructive parallel is to be found in the miniature caryatids decorating the throne of Alexander’s grandmother, Eurydice I, found in her tomb at Aegae and shown in Figure 4. They are alternated with actual pillars acting as struts in its construction. They too have one arm upraised and the other lowered and slightly lifting their dresses. They have a slightly more dynamic posture than the Amphipolis caryatids, appearing to strut rather than merely step forward, so they have sometimes been called dancers.
Nevertheless, the general similarities are striking, when we remember that this same throne also had sphinxes (now stolen), which were one of the parallels to the Amphipolis sphinxes that I mentioned in my previous article. It is hard not to see confirmation of a connection between a fourth century BC queen of Macedon and the Amphipolis tomb in the caryatids of Eurydice’s throne.

Indeed, the very fact that the caryatids constitute a second pair of female guardians for the Amphipolis tomb should surely be recognised as hinting at a female occupant for the tomb.
Whereas modern sensibilities may incline us to eschew sexual stereotypes, it would be the height of foolishness to project such modern views back onto 4th century BC Macedon, for which our sources are extremely clear that kings had adolescent boys as their servants, whereas queens had women and adolescent girls.
It is possible to be more specific. Plutarch in the second chapter of his Life of Alexander gives a colourful account of Olympias and her women. He writes that these women participated in Orphic rites and Dionysiac orgies with the queen and were called Klodones (possibly “spinners” or “cacklers”) or Mimallones (“men imitators”).
Polyaenus 4.1, in a story about Argaeus, an early king of Macedon, writes that the Klodones were priestesses of Dionysus, who became called Mimallones after Macedonian virgins carrying the wands of Dionysus were mistaken for men in a battle. Plutarch also tells us that Olympias kept serpents that would often rear their heads out of the “mystical winnowing baskets” of her Klodones to terrify the men.
The word λίκνων that Plutarch uses for these baskets describes the type of basket that is carried on the heads of the Amphipolis caryatids. Therefore, on the assumption that the Amphipolis tomb is that of Olympias, the explanation for the caryatids would be that they represent those Klodones that shared in Orphic rites with the queen whose tomb they guard.
Ostensibly, the lion from the monument that once stood atop the tomb mound at Amphipolis as shown in Figure 5 is a problem for the identification of the tomb as that of Olympias. Some have argued that it might be a lioness as no penis has yet been found belonging to it. But this is difficult, because it has a very definite mane, an attribute exclusive to male lions. However, the second chapter of Plutarch’s Alexander answers this point too, for he tells the story of how Philip, Alexander’s father, dreamt that he put a seal bearing the device of a lion on the womb of Olympias whilst she was pregnant with Alexander.
What better symbol, therefore, to proclaim the tomb of the mother of Alexander the Great than the device on the seal under which she became his mother? And it is a truly monumental lion standing 5.3m tall, the biggest of the lions from early Hellenistic tombs and far bigger than the lion that stood (and now stands again) on the battle site of Chaeronea.
It must at any rate have marked the tomb of an exalted individual and there are not so many that qualify within the period defined by the excavators.

Another objection to the candidacy of Olympias is the fact that Diodorus 17.118.2 accuses Cassander of having left her unburied at the spot where she was murdered by the relatives of her own victims.
However, there is nothing to say that this was not a temporary indiscretion and indeed it has generally been assumed that either Cassander or Olympias’s relatives and supporters must eventually have arranged the entombment of her remains. There would have been a great deal of moral and social pressure in Macedonia at the time to ensure that the mother of Alexander the Great eventually received a fitting burial.
Finally, I was well aware even before I wrote my previous article that there is a paper published in the journal Hesperia that seeks to infer from fragmentary inscriptions that there was a tomb of Olympias at Pydna, although no such tomb has ever actually been found in the vicinity of Pydna.
Its methodology is to fill gaps in these inscriptions in ways differing from the ways the gaps were filled by the scholars who originally reconstructed their texts and such as to allude to the existence of an undiscovered tomb of Olympias at Pydna.
I fear however that this paper may say more about the ingenuity of its author in the art of textual reconstruction than about the true location of the tomb of the mother of Alexander the Great.
It is unlikely that Olympias died at Pydna, because she died at least weeks after she surrendered to Cassander at Pydna and Cassander seems to have been nearby when she died. It is hard to believe that Cassander remained lurking at Pydna for all those weeks, whilst Amphipolis remained the focus of revolt against his rule.
Neither my previous article nor this follow-up in any way proves that the lion tomb of Amphipolis is that of Olympias. Nevertheless, I believe I have shown why Olympias remains the leading candidate with Roxane as a strong secondary possibility.
Literally everything that is currently known supports this hypothesis, whereas other candidates either conflict with the archaeological dating or fail to provide such satisfactory explanations of the symbolism inherent in the marvellous statuary of this magnificent Macedonian mausoleum.
*Andrew Chugg is the author of The Quest for the Tomb of Alexander the Great and several academic papers on Alexander’s tomb.