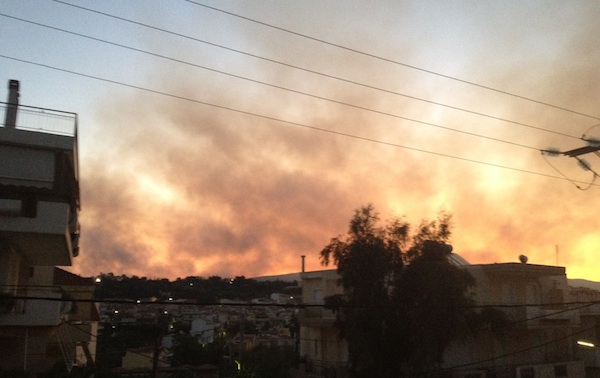 Two major fires that started half an hour within each other threatened populated areas in the Attica region of Keratea on Saturday afternoon, while a third major fire was reported near Aliveri, on the island of Evia, Greece.
The first of the two fires in Keratea burned low-growing shrubs and grasses, while the second burned through pine woods. The second fire in the Lakiza area was deemed the most dangerous, though both are in areas with scattered houses and settlements. No damage has been reported so far.
A major fire-fighting force of 100 firemen, 40 fire engines, a 20-man team on foot, six municipal vehicles, two water-bombing aircrafts and two helicopters have been deployed to put out the flames.
The fire in Aliveri started at around 11:40 am in a gorge with low vegetation, mostly dry grass. It had e out at first, but rekindled on Saturday afternoon due to strong winds blowing in the area. The fire posed no threat to houses. A force of 40 firemen, 15 fire engines, a 14-man team on foot, three municipal vehicles, two aircrafts and one helicopter have been sent to put it out.
Meanwhile, authorities on Saturday reported the arrest of a 39-year-old man on two cases of arson in Kareas, Attica. The suspect was arrested on Friday by the fire brigade’s arson department and confessed to setting two fires in a wooded area of Kareas, one on July 6 and one on Friday, that were immediately put out by the fire brigade.
The man told investigators that he set the fires because he liked to see the fire engines and airplanes rushing to respond.
(source: ana-mpa)