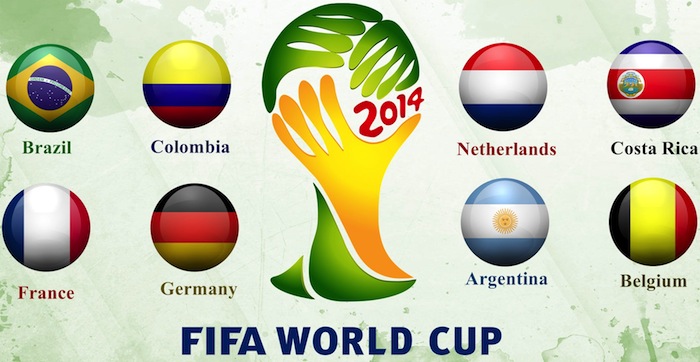 After The Netherlands beat Costa Rica, here is a complete guide for the 2014 World Cup Semifinals: Quarterfinals results, final standings, top scorers, dates, match previews.
As in every previous World Cup, all surprise teams collapse and only the almighty prosper. The teams that qualified for the 2014 World Cup Semifinals, have reached the final 21 times and raised the trophy a combined of 10. The bookmakers’ favorites a.k.a the big four, Brazil, Germany, Argentina and the Netherlands, are going to be the teams to wrap up our focus this last week of football’s most important tournament.
The Teams that Made it to the 2014 FIFA WORLD CUP SEMIFINALS (Brackets below) 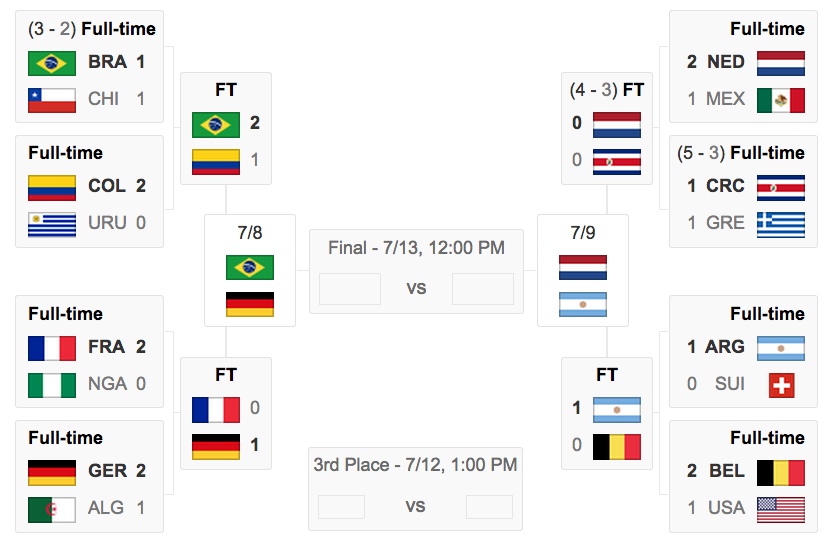 GERMANY vs France
In the first game of the Quarter finals, Germany took out France in arguably the worst game of the four. Worn down by the heat, the players were unable to create any chances and the only goal came from a set piece when Borussia Dortmund’s defender Mats Hummels headed the ball in Hugo Lloris’ net in the 15th minute of the game. Germany, who is considered the unluckiest team in recent years, has reached the semis four tournaments in a row, but hasn’t been able to lift the trophy since 1990 when they beat Argentina in the World Cup final held in Italy. Germany will be placed against Brazil in Belo Horizonte on July 8.
BRAZIL vs Colombia
After being absent in the 2006 and 2010 World Cups, Brazil has reached the semis and is looking to repeat the 2002 triumph were they beat their next opponent, Germany. Brazil took down Colombia easier than what a 2-1 victory indicates as they were hardly threatened. James Rodriguez scored a penalty in the 79th minute and put some pressure on the Selecao, but it wasn’t enough to cancel Thiago Silva’s goal and David Luiz’s astonishing free-kick. A moment to remember is when, as the final whistle was blown, Colombian James Rodriguez couldn’t seize his tears and David Luiz seeked the crowd’s applause to console the top scorer of the tournament so far. Brazil will look for that World Cup final spot without the help of Neymar, who was heavily injured and will miss the last two games, or Thiago Silva who was booked out.
ARGENTINA vs Belgium
For the first time since 1990, when Diego Maradona was still present, Argentina has made the semi-finals. A win over Belgium with Gonzalo Higuain’s goal at the 8th minute, took the South American country at the furthest point it’s been since 2008 and the gold medal in the Beijing summer olympics. In a game where Messi was hardly noticed, the Napoli striker stepped up a level and lead his team to glory. With a beautifully curved shot from just outside the 18-yard-line, Higuain beat Belgium’s keeper Courtois. Apart from the goal, Gonzalo seemed like the most energized player on the pitch, pushing his team high, keeping the ball at his feet and winning a number of fouls to give his team a breather. Argentina will now face Holland in the semi finals on July 9 in Sao Paolo but will miss Angel Di Maria who got injured as well.
THE NETHERLANDS vs Costa Rica
The 1974, 1978 and 2010 finalists have yet to win a World Cup. Arriving from the easiest draw compared to the rest of the teams, Arjen Robben and his fellow teammates are hoping to win it unlike Johan Cruyff’s flying dutchmen in the 70’s. Costa Rica was the surprise team up to the quarter finals and threatened the Oranje with dangerous counter attacks but ultimately lost the match in the penalty shootout.
SemiFinals
Estádio Mineirão, Belo Horizonte, July 8th @4pm EST
BRAZIL vs GERMANY
Arena Corinthians, Sao Paolo, July 9th @ 4pm EST
ARGENTINA vs THE NETHERLANDS
World Cup Top Scorers
6: James Rodriguez (COL)
4: Messi (ARG), Muller (GER), Neymar (BRA)
3: Benzema (FRA), Van Persie (HOL), Robben (HOL), Shaquiri (SWI), E. Valencia (ECU)