GRNews
GreekReporter.comGreek NewsWhat is Roller Derby and Why You Should Support Team Greece in...

In the last decade, roller derby has gotten a little more of its due attention. In 2009, actress Drew Barrymore made her directorial debut with Whip It, a film about Roller Derby starring Ellen Page (whom you can also see in this month’s XMEN: Days of Future Past).

Not familiar with the sport? Roller derby is a sport played on an indoor track in which two teams of five members skate in circles, with the object of trying to lap players of the opposite team several times in order to win. It is a contact sport that can get pretty rough, which explains why its players don so many pads. The sport is played on roller skates, and though started in the 1930s by males who participated in marathon skating events, roller derby today is played mostly by females. The sport as gone international and is widely popular.

Which brings us to the point of why you should care about roller derby; Team Greece is out there, ready to compete in the World Cup of 2014! The World Cup is in December of 2014 in Dallas, Texas (USA), and Team Greece is currently raising funds to attend this monumental event. Team Greece is among thirty teams who will be competing in December, and judging by the demi-goddess-looking group, they stand a fighting chance.

“The sport might not be popular in Greece, but 2 leagues have been formed in order to put it on the map,” says Team Greece coach Lou Peters who got involved with the team after he saw an online posting.

“I saw a posting on Facebook that they were looking for players, I sent a email with the hope that they were still looking for coaches and thankfully they still had one spot left. My home league is the Detroit Derby Girls and this is the start of my fifth season in the sport and with the league,” says Peters.

Team Greece is comprised of both full-blooded Greeks and Greek-Americans, all proud to represent Greece as they skate and smash their way to the World Cup. Though with some seemingly vulgar names, the women who skate for Team Greece are formidable athletes, with intimidating names like “Sparta-Kiss,” and “Dire Ria.” These fierce women are working hard, training, and preparing to compete and show that Greeks can dominate even roller derby! 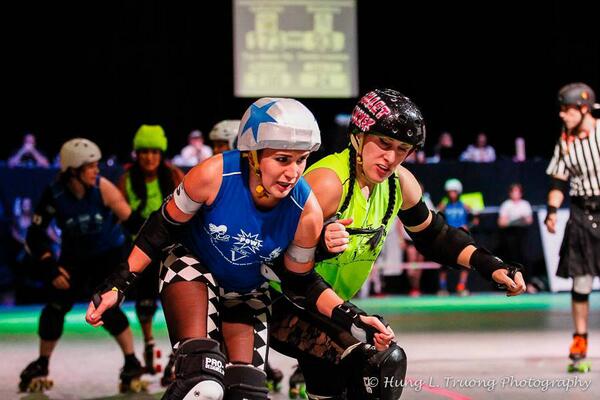 The full roster of Team Greece has not been announced yet “since some players are still in the process of renewing or obtaining Greek passports so they can qualify for the World Cup.”

The Team Greece coach agrees that roller derby is “seemingly chaotic” but [the sport] “is very intricate.”

“Roller derby is the only sport where someone plays offense and defense at the same time, you have to think three steps ahead while avoiding someone who’s trying to knock you down all while moving at a tremendous speed on roller skates,” says Peters who is joined in Team Greece by coach Misty Greer (Pia Mess) of the Silicon Valley Roller Girls.

For more information or to support Team Greece in their efforts to get to Dallas this December, visit their Facebook page to check out the awesome members of this dynamic team. Check out their twitter page for up to date information about their roster and competitions. And while you’re at it, visit their fundraising pages on Booster and Gofundme and maybe pick up a shirt or two. No one is likely to mess with you if you’re wearing a Team Greece Roller Derby team shirt!

Good luck ladies. We know you’ll do us proud!