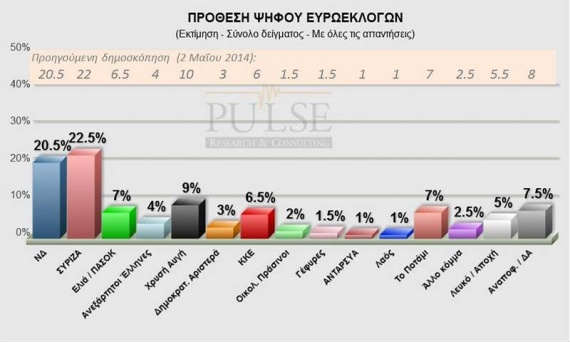 A new poll conducted across Greece by Pulse RC from May 2 to May 7 gives SYRIZA a 2% lead over New Democracy for the upcoming Euro elections.
More specifically, since the last Pulse poll last week, SYRIZA has increased its lead by 0.5%, and is estimated to win 22.5% of the votes, while New Democracy retained its 20.5% share. The far-right Golden Dawn lost 1% to poll at 9%. Moreover, the Democratic Left (DIMAR), To Potami and Independent Greeks (ANEL) remained steady at 3%, 7% and 4% respectively.
The socialist coalition Elia, the Communist Party of Greece (KKE) and the Ecologists Greens increased their share of the vote by 0.5%, polling 7%, 6.5% and 2% respectively. Three more parties also remained steady compared to the previous poll: Gefyres at 1.5% and LAOS and ANTARSYA at 1%. Furthermore, 2.5% of the voters chose to vote for other parties, while blank votes and abstentions fell to 5% compared to 5.5% last week, and swing votes and don’t know/no answer also fell to 7.5% from 8%.
Asked who would win, 45% of the participants said SYRIZA compared to 44% last week, while 36% went for New Democracy, 9% of voters said that another party would win and 11% of participants didn’t give an answer.
However, according to the poll, the current Greek Prime Minister and New Democracy leader Antonis Samaras seems more suitable for the top job, polling 32% compared to 26% for SYRIZA’s leader Alexis Tsipras, who managed to increase his share of the vote by 2% since the last poll, although 40% found neither suitable for the premiership, while 2% didn’t answer.