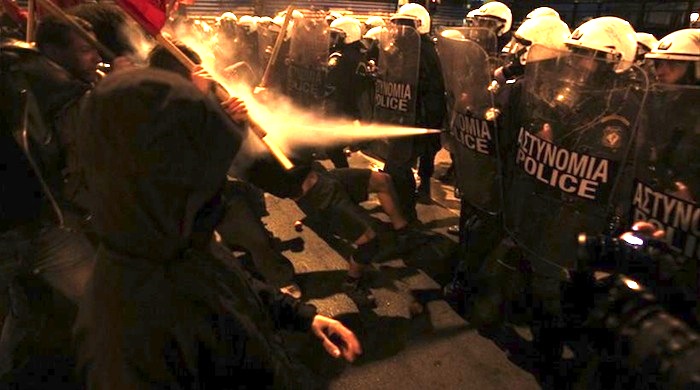 Despite the protest ban by the Greek Police due to the Ecofin and Eurogroup meeting, a demonstration was held on Tuesday, April 1 in downtown Athens, organized by the major opposition party SYRIZA, the All Workers Militant Front (PAME) and the anti-capitalist party ANTARSYA.
Shortly after 8 pm, there were clashes between the protesters and the riot police, used tear gas to break up the protesters. Tensions mounted when some groups of protesters, who were standing in front of the police forces at Stadiou Street, tried to break the cordon and head to Syntagma Square. Police responded by a controlled use of chemicals.
Police security measures in the center of Athens were particularly tight, with riot police vehicles blocking Stadiou Street and a helicopter monitoring the demonstration.
SYRIZA members Panagiotis Lafazanis, Dimitris Stratoulis and Grigoris Kalomoiris were at the forefront of the protest.
Lafazanis said that the protest ban imposed by the Greek government is a reminder of the dark pages of Greece’s history and won’t stop the citizens from protesting. “Greece is an independent and democratic country,” he added.
[youtube]TwAkHmAsXKk#t[/youtube]