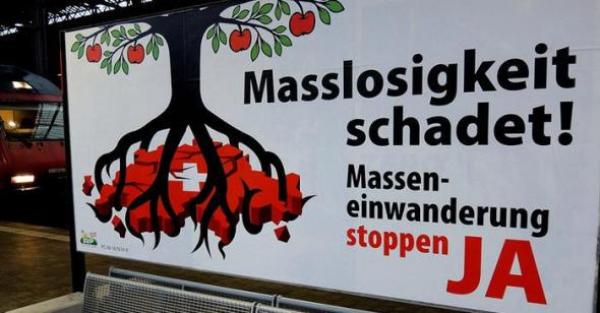 “The Greek Presidency of the EU Council expresses its regret on the outcome of the referendum in Switzerland on the initiative “against the massive immigration,”” announced Greece’s Ministry of Foreign Affairs.

“The introduction of quotas on the immigration of EU citizens goes against the principal of the free movement of persons between the European Union and Swiss Confederation as described in the bilateral agreement in force which is a key factor for the harmonious development of our relations,” stated the Greek Ministry of Foreign Affairs.

“The free movement of persons is a fundamental principle of the European Project and a fundamental right of all European citizens, Swiss nationals and citizens of any other EU member states, which needs to be preserved and promoted,” continued the Greek Ministry.

On Sunday, a referendum was held in Switzerland in favor of the proposal to re-impose restrictions on the immigration issue and to negotiate anew the agreements between Bern and the European Union. A narrow majority of Swiss voters (50.3 percent) supported this proposal which was submitted by the far-right Swiss People’s Party (SVP).

“The European Union will have to examine the consequences of the result of the referendum and is ready to work with the Swiss government in order to find ways of addressing the issues raised henceforth. The Greek Presidency of the EU Council will monitor this procedure closely in cooperation with institutions and member states of the European Union,” added Greece.

Although Switzerland holds an officially neutral stance and is not a member of the EU, the country’s policy on immigration was modeled on the fundamental right of free movement of people to and from the EU, and also provided the admission of a limited number of people from outside Europe.

The Swiss Minister of Justice stated: “This is a turning point, a change of system with far-reaching consequences for Switzerland,” while Hannes Swoboda, a member of the European Parliament claimed that “for us, EU-Swiss relations come as a package. If Switzerland suspends immigration from the EU, it will not be able to count on all the economic and trade benefits it is currently enjoying. We will not allow cherry-picking.”