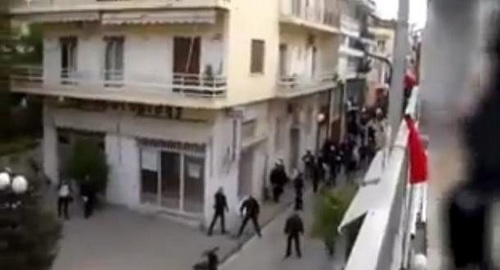 As a result of the violent outbreak last Saturday on the streets of the municipality of Keratsini caused by affiliates of the Golden Dawn neo-Nazi party, the mayor of the municipality is asking for increased police patrols throughout the streets of his city.
In his request sent to Minister of Public Order Nikos Dendias, the mayor of the Piraeus municipality, Loukas Tzanis, mentioned that there is an urgent need to redesign and beef up existing law enforcement measures, primarily now that the municipal police force has been dismantled. The integrity and safety of the municipality’s citizens must be secured from any kind of fascist attacks, added Tzanis.
Late on Saturday, a group of Golden Dawn supporters threw rocks and missiles at Resalto, a leftist, anti-establishment hangout located in Keratsini, leading to surrounding homes suffering damages.
They also tore down a banner that had been put up in the Greek working class neighborhood near the spot where rapper Pavlos Fyssas was stabbed to death by Golden Dawn member Giorgos Roupakias on September 17 last year.
In their statement, Fyssas’s family and friends said the incident was an attempt to “terrorize” them and the Greek society. “It is one more knifing against all of us and against human values in Greece,” the family said.
The about 100 supporters of the ultra-nationalist party conducted a military-style parade in the Piraeus suburb’s center prior to attacking the leftist establishments, celebrating the Golden Dawn spokesman’s Ilias Kasidiaris decision to run for mayor of Athens in the upcoming local elections, held May in Greece.