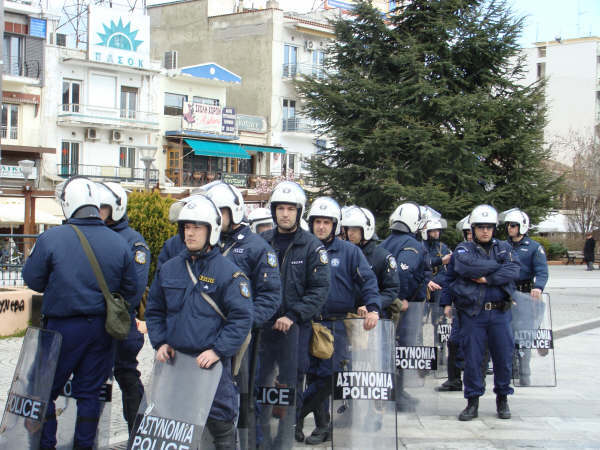 Greece has taken extra precautions and beefed up security in the wake of the disappearance of a convicted November 17 terrorist who walked away from a holiday furlough and then appeared in an Internet video promising a wave of violence, and as the government put a four million euro bounty out for him and other terrorists.
Law enforcement officials have officials have boosted security to levels not seen since the 2004 Olympic Games here, with stepped-up police patrols around embassies after the government received a taunting threat that more violence is about to descend.
Authorities fear that Christodoulos Xeros, a member of the notorious November 17 group that carried out killings for decades before being caught ahead of the Olympics, will carry out his promise to strike again after he put a video on the Internet railing against austerity measures being imposed by the government on the orders of international lenders saying that the price of treason for political leaders was death.
Xeros vanished on Jan. 6 when he didn’t return from a vacation he was given from the Korydallos Prison, the seventh he’d been granted even though he was serving six life sentences for six assassinations, including five of Americans serving at the U.S. Embassy in Athens over the years.
While the newspaper Kathimerini said unnamed government officials are directing tightened security and fear a terrorist attack on a high-level target, there was no word on how embassies and consulates, particularly that of the U.S., would beef up protection. It was the scene of a rocket attack several years ago.
One official revealed that bomb disposal experts have been instructed to search individuals and vehicles that appear suspicious near venues hosting foreign envoys. The force is also reviewing security for the 320 top potential targets for terrorist hits in Athens, according to sources.
Greek authorities are believed to have enlisted the help of the FBI and Scotland Yard to boost security. It was earlier reported that the security measures could include stopping cars at random, doing spot checks like New York’s stop-and-frisk, and putting snipers on rooftops around areas suspected to be targets.
Several of Greece’s long list of terrorist groups have also said they would collaborate to go after politicians, journalists, police, judges, bankers, businessmen and other of their self-styled enemies.
Nikos Maziotis, the convicted leader of the Revolutionary Struggle terrorist group – who, along with Panagiota Roupa – was let go last summer after serving the maximum 18 months allowed in detention under Greek law without being charged –  is believed to be behind a gunfire assault on the home of the German Ambassador to Greece in late December, in which gunmen sprayed his house with a barrage of bullets.
The near lockdown comes at embarrassing and tense time for Greece as it holds the rotating six-month European Union Presidency and is still in taut negotiations with envoys from the its lenders, the Troika of the European Union-International Monetary Fund-European Central Bank (EU-IMF-ECB) over unresolved reforms and a 1.4 billion euro hole in the 2014 budget.
Police investigations continued, with raids on several apartments in Athens and Thessaloniki and three arrests, two in the capital and one in the northern port.
Meanwhile, the police offered a four million euro reward to anyone providing information leading to the arrest of Xeros as well as another two convicted members of Revolutionary Struggle, including Maziotis and Roupa, and the unknown killers of two members of the neo-fascist Golden Dawn for which another group has taken responsibility. There are at least 87 known terrorist and anarchist groups in Greece.
Authorities offered a reward of one million euros for information leading to Xeros’s arrest, the same sum for the arrest of Maziotis or Roupa and one million euros for details about the gunmen behind the murders of two Golden Dawn members in Neo Iraklio, northern Athens.
Justice Minister Haralambos Athanasiou is reportedly drafting legislative reforms that would make it easier for judicial officials to remand suspects pending trial and planning to tighten security in the country’s prisons, particularly in supposedly high-security institutions such as Korydallos Prison near Piraeus, which got a new warden.
Hara Koutsomichali replaces Maria Stefi, who was transferred to another prison as an investigation gets under way into how Xeros was allowed to meet regularly with jailed members of another guerrilla group, Conspiracy of the Cells of Fire, while he was an inmate at Korydallos.