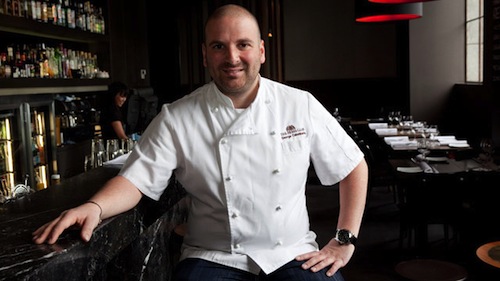 The amiable judge of Masterchef Australia George Calombaris is on his way back to the UAE capital after his 2012 debut appearance to present a ‘Star Struck Cook & Lunch’ at the Eastern Mangroves Hotel & Spa by Anantara and a ‘one-night-only’ celebrity dinner at the five-star Sofitel Abu Dhabi Corniche.
Both appearances are part of the 16-day Gourmet Abu Dhabi culinary festival which runs throughout Abu Dhabi city from February 4-19.
During the four-hour,‘Star Struck Cook & Lunch’ on Saturday, February 15th, where places are limited to 24 guests, Calombaris with take guests through three recipes and then sit down with his ‘students of the day’ for a lunch based on the recipe curriculum.
“This is a rare opportunity for the guests to get up-close-and-personal with George who has won a huge following in his home country and overseas,” said Noura Al Dhaheri of the Gourmet Abu Dhabi organizing Committee.
The ‘one-night-only’ celebrity dinner, on February 16th, is part of the Gourmet Abu Dhabi culinary festival and follows the Greek-Australian’s sell-out success at the 2012 event.
For the 35-year-old master-chef who owns six restaurants in Melbourne and one in Mykonos, Greece, and draws upon his Greek and Greek-Cypriot heritage in his cooking, the return to Abu Dhabi is something of a labour of love.