Italy: Greek Statues Back on Display 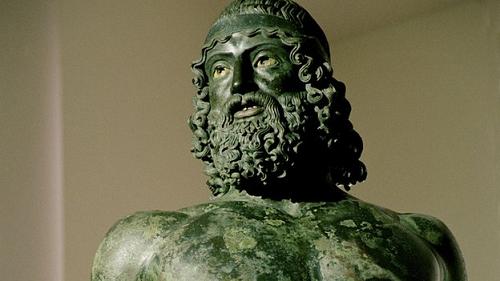 After four years of national controversy concerning two 2,500 year-old Greek statues, Italy’s Minister of Culture has decided to put them on exhibit once more.

The Riace Bronze statues are two life-like, magnificent Greek warriors of Magna Graecia, a Greek civilization that used to inhabit the southern part of Italy. A senior archaeology official, Simonetta Bonomi, said, “Their charm is that they are ancient and whole and perfect – extremely refined.”

As of this Saturday, when the highly anticipated inauguration ceremony took place, the statues are part of the exhibition in the National Museum of Magna Graecia in the city of Reggio Calabria.

In 2009, the museum had been shutdown for renovations and the statues were moved. The renovation process was delayed due to bureaucratic reasons, and as a result the two Riace Bronzes were left in storage.

An UNESCO official characteristically said that the statues were “disgracefully” abandoned. Meanwhile, art lovers demanded that the Ministry of Culture put the status on exhibit, but the archaeology official said that “they were prone, lying down, to allow the restorers to work on them” and that the situation had been overblown.

Everything worked out as the statues are now standing proudly as part of the exhibition in the state-of-the-art National Museum of Magna Graecia.

“We are keeping a promise to give all the citizens of the world back one of its greatest treasures,” said the Minister of Culture, who had tried to speed the process of returning the statues at the Museum.