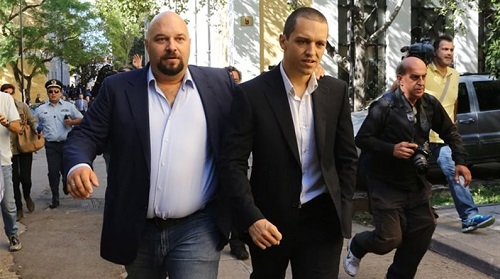 More testimony is developing in the case against leaders of the Greek neo-Nazi Golden Dawn party, particularly its Members of Parliament charged with running a criminal gang:  Ilias Panagiotaros, Ilias Kasidiaris, Giorgos Germenis and Stathis Boukouras.
One of the witnesses, a party member, reportedly revealed that anti-fascist hip-hop artist Pavlos Fyssas, 34, who was killed on Sept. 17 by a man police said was connected to the extremists, was a pre-meditated target. He had been very vocal against the party in his music. The witness, whose name was not given, reportedly said that he was trained by Giorgos Germenis who was called “captain” and who was the judge of  “trials” against the party’s perceived enemies.
According to this witness, another MP was responsible for Piraeus and the surrounding areas, Panagiotaros had the southern suburbs but they were under the command of Kasidiaris, who gave indoctrination speeches while Panagiotaros gave out special uniforms and batons.
The party’s second-in-command, Christos Pappas, being held in jail pending his trial, was called “Brigadier”.
The second witness was said to be a Golden Dawn member in Corinth who told an Athens court of racist attacks against “illegal immigrants in the region of Corinth” and said one occurred last year in front of police officers who laughed while it happened. Many police are reportedly aligned with the neo-Nazis as the government tries to root out wrongdoers.
The witness also said that the MP representing the area, Stathis Boukouras knew about these incidents and had “an unknown number of Zastava guns.” He said also that “he had hidden guns and food, in an abandoned monastery in ancient Kleones.” Another witness said party members tried to recruit teenagers..
The third witness supported that “the target of Golden Dawn is the democracy. They used to tell us that we will enter the Parliament with tanks.” He also said that Nikos Mihos was a trainer on “how we can kill the enemy with a knife.” The witness also claimed the trainings “took place in folds on Attiki and Malakasa” where the trainers do mass slaughters of animals, in order to learn how to use the technique of blows with a knife in the carotid artery.
According to the same witness, Mihos pushed against payment weapons to other members of the organization, while noting that as he had heard, “they were practicing in an isolated region of Palia Penteli.”
The new testimonies reportedly could lead prosecutors to again try to have Kasidiaris and Panagiotaros, who had been temporarily released by the court pending trial, placed in custody again.