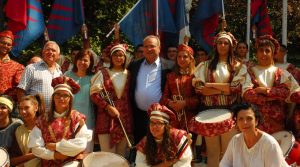 The 2nd Medieval Byzantine Festival named Alexiada, will begin in Kastoria under the auspices of the municipality of Kastoria and the citizens who contributed to the organization of the festival, which will start on August 22.
The festival will start with the presentation of a theatrical play that was dedicated to the Greeks of the Diaspora from Kastoria and the tradition and history of the town.
Moreover, the festival includes a concert performance by the Choir of the Department of Musical Studies of the Ionian University and also an exhibition of the architect Michalis Vasilopoulos.
Τhe highlight of the festival is expected to be the reproduction of the tradition of Kastoria, in which volunteers will act wearing folk costumes.
A Byzantine Bazaar will be available this year too, and will close on September 1 with the musical performance by Maria Photiou.