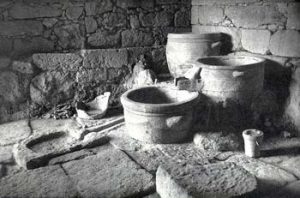 Wine history in Greece dates back to the ancient times, though it is not difficult to find winemakers that keep the ancient traditions of Greek winemaking alive until nowadays.
In ancient Greece, wine had its own god, Dionysus. He was the god of the grape harvest, winemaking and wine, of ritual madness and ecstasy in Greek mythology.
Vathypetro (Greek: Βαθύπετρο), an archaeological site, four kilometers south of the town of Archanes on Crete contains some of the oldest wine presses in the world.
Excavations began in 1949 by the Greek archaeologist Spyridon Marinatos. The estate contains a manor house or villa which had a prominent role in the rural region around Archanes.
The complex consists of several buildings, courtyards and workshop spaces. Next to the individual houses is the Minoan wine press, a plant for the production of olive, a Minoan kiln and ceramics, and the remains of an ancient pottery workshop.
But winemaking tradition still goes on in Crete.  Take Alexakis Winery, one of the the most important ambassadors of Cretan wine. It is the largest privately owned winery in Crete and during its long path has collaborated with almost all the winegrowers on the island. The result is high quality wines based on a thorough knowledge of the Cretan vineyard .
The winery is a family affair. The founder of the firm Stelios Alexakis chemical engineer and oenologist is still in charge of the winery, having the help of his wife Sofia, responsible for quality control.
Much of their wine is exported (to Russia, USA) – its major oenological ambassadors are the Alexakis-Vidiano, Alexakis-Kotsifali-Syrah and Alexakis-Dafni.