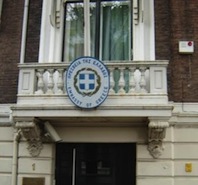 The French channel TV5 broadcast a one-hour documentary about the work of 10 diplomatic missions in Canada on July 4, aiming at shedding light on the role that Embassy officials play at all levels, and included Greece’s representation in Ottawa along with France and Sweden.

Press Counsellor Athanasia Papatriantafyllou talked about the role of a contact person in an Embassy in Canada. She had the opportunity to refer to Greece, Canada and the Greek community, its integration into Canada and the public diplomacy’s human dimension.

The visual material that framed the talking was of the celebrations for the National Day of March 25 in Ottawa, Canada, with the participation of Ottawa’s Mayor Jim Watson, of the Greek community’s President, Jim Reklitis and the Greek Ambassador to Canada, Eleftherios Angelopoulos.

The dimension that concerns the Greek participation was enriched with information and photographic material from Greece and the Ottawa Greek Festival, which is the most popular festival and has the biggest participation in the city.