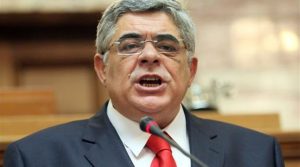 The Secretary General of Golden Dawn, Nikos Michaloliakos, used insulting language about Adetokunbo. In an interview on a television show he likened the international basketball player with a chimpanzee.
When the hosts asked him to comment on the photograph of Adetokunbo at the Maximos Mansion, where he was congratulated by the Prime Minister for having been selected in the NBA draft, he replied by asking people to pronounce the basketball player’s surname, “If you can pronounce it, then you can call him a Greek”, he said.
The statement that caused the greatest reaction was, “If you give a ball to a chimpanzee, it won’t catch it?”
He also mentioned that he is not moved by the fact that Adetokunbo raised the Greek flag in the NBA.