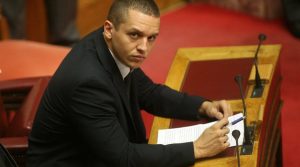 Golden Dawn’s first Internet broadcast presented by MP and spokesman of the Greek far-right political party Golden Dawn, Ilias Kasidiaris, was deleted.
The broadcasting was aired online, but then the video was deleted from the site due to “non-compliance with the local law.”
Golden Dawn said in its announcement, “The absolute exclusion of the Nationalist Movement unfortunately continues also on the Internet. What else will the international system think of to curb our rapid rise?”
“Despite the exclusion of our first broadcast by Youtube in dozens of countries, the program managed to be aired.  Golden Down’s web television will continue to broadcast through another site.”
As the party announced, they will broadcast on June 24 at 22:00 through another website.