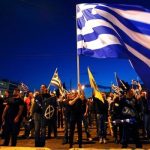 Angry that the Greek government is paying to renovate a building that will become the country’s first official mosque, the neo-Nazi Golden Dawn party is reportedly planning to mobilize 100,000 protesters to try to stop it.
The Macedonian International News Agency (MINA), which is located in FYROM, said the party’s spokesman, Ilias Kasidiaris, told supporters at a rally that there will be massive turnout if the government proceeds with its plans.
Golden Dawn opposes the presence of all foreigners in Greece and has a particular animus against Muslims. Even 200 years after Greece gained its freedom from 400 years of Ottoman occupation, some Greeks retain animosity against Turkey and there is a growing anti-Islam tide.
The promise of a Golden Dawn protest march came after the Muslim Association of Greece claimed it had received a crude note littered with profanities, warning its members to leave the country or face “slaughter like chickens.”
Police said they were examining the note, which happen to have the symbol of Golden Dawn on the backdrop of the note, proper. Golden Dawn denies involvement with sending the threatening note.
The examiner.com reported that the Gatestone Institute reported that, as of 2011 Greece has a legal Greek citizenry Muslim population of roughly half a million, mostly of Turkish origin and scores of thousands more Muslims try to enter illegally from Central and North Africa, the Middle East and Southern Asia.
Many of the estimated 200,000 Muslims living in the Greek capital city of Athens alone are illegal immigrants from Afghanistan, Bangladesh, Egypt, Nigeria and Pakistan.
Golden Dawn has been blamed by some NGO’s and activists with being behind assaults on immigrants, which is has denied, and the coalition government led by Prime Minister and New Democracy Conservative leader Antonis Samaras is struggling to get behind an anti-racism bill aimed at the extremists.
Greece currently offers sanctioned Muslim religious sites near its northeastern border with Turkey and there are many unofficial mosques in basements and other buildings.