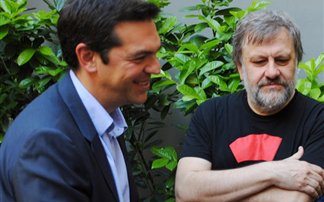 Appearing with Alexis Tsipras, leader of Greece’s major opposition party the Coalition of the Radical Left (SYRZA) at a Croatian film festival, Slovenian philosopher Slavoj Zizek said anyone who doesn’t support the party should be sent to a gulag, political prisoner detention camps. That would be the majority of Greeks who oppose SYRIZA.
The pair were at the Subversive Festival where Tsipras also met US director Oliver Stone, who was a supporter of the late Venezuelan socialist leader Hugo Chavez.  During a panel discussion with Tsipras, Zizek expressed his appreciation for SYRIZA. He had appeared alongside Tsipras in Athens ahead of last summer’s national elections as well.
“SYRIZA is one of the bright lights in Europe today,” Zizek told the audience in Zagreb. The party opposes the international bailouts that are saving Greece and is vehemently against attached austerity measures and Tsipiras said if he were Premier that he wouldn’t fire anyone and would keep spending at the same breakneck pace that made Greece go essentially bankrupt. He has offered no solutions to the economic crisis.
Zizek, an unabashed extremist leftist, made his provocative comment after a video on social media and lashed out at all Greeks who don’t give their unconditional support to SYRIZA.  “If they don’t support SYRIZA then, in my vision of the democratic future, all these people will get from me a first class one-way ticket to (a gulag,”) he said. He didn’t mention the irony that in a democracy there are no gulags.
The ruling New Democracy Conservatives of Prime Minister Antonis Samaras issued a statement saying Zizek’s comments were “bloodcurdling and repulsive.” They called on Tsipras to explain why he did not react to the philosopher’s comments. The party added that “thousands of people of Greek origins were killed in gulags.”
SYRIZA responded by slamming ND for taking the comments seriously. “It seems that stupidity and absurdity has no limits at New Democracy,” the leftist party said.