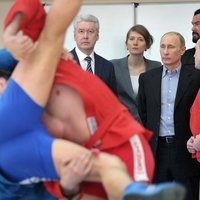 Russian President Vladimir Putin has criticized a decision by the International Olympic Committee (IOC) to drop wrestling from the games and also asked for the Russian martial art of Sambo to be included.

“The exclusion from the Olympic program of traditional sports which have initially been incorporated in the Olympic Games’ program, since the time of Ancient Greece, birthplace of the Olympic Movement, is unjustifiable,” he said.

“This matter demands a separate conversation with our friends from the International Olympic Committee,” he added, noting that Russia would support its reinstatement. Putin, a practioner of judo, said that sambo is “very beautiful, dynamic and unites a great number of sports of people of USSR.”

He said it has growing numbers of fans and supporters and has been established internationally, including popularity in countries such as Great Britain, Morocco, Bulgaria, Italy and Belarus, the leaders of which informed him about the sport’s evolution in their countries.