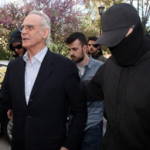 As he awaits trial on more serious charges of money-laundering and embezzling as much as one billion euros ($1.3 billion) from contracts he awarded, former Greek defense minister Akis Tsochatzopoulos said that his eight-year jail sentence for failing to fully declare his assets in 2008 and 2009 was politically-motivated by the government which wanted to make an example out of someone during a crushing economic crisis.
Several days after being handed the sentence, Tsochatzopoulos, a former stalwart of the PASOK Socialists before being booted, issued a statement on March 10 accusing the coalition government led by New Democracy leader, Prime Minister Antonis Samaras, of making him a scapegoat. The administration, however, includes PASOK as well as the Democratic Left.
Tsochatzopoulos claimed the court’s verdict was “a unique decision in post-junta Greece.” Just two days earlier, the Athens Council of Appeals Court Judges decided that Tsochatzopoulos and 18 others, including his wife and daughter, should stand trial in connection to the alleged acceptance of bribes while he was in office and the laundering of this money through offshore companies and property purchases.
Authorities said the group was involved in an elaborate scheme to launder bribes from defense constracts when Tsochatzopoulos was the defense chief in the late 1990′s and early into the last decade. Also appearing in court was his wife, Viki Stamati. The mansion under the Acropolis the pair was said to have bought with illicit funds was seized by the government.
The case is likely to be heard in a Greek in Athens next month, sources told the newspaper Kathimerini. The 19 are accused of being involved in the process of accepting bribes, laundering the money through offshore firms and then using it to buy property and other assets.
The government has cracked down hard on corruption cases, with the life sentence given Vassilis Papageorgopoulos, former mayor of Thessaloniki, a New Democracy veteran, along with two other former municipal officials. Other suspects are going to be tried as well in the case in which prosecutors said the gang stole 52 million euros, some $67.5 million.