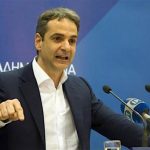 Greece needs to drastically reduce its bloated public sector and keep administering more reforms to get out from under its crushing economic crisis, Former Prime Minister Constantinos Mitsotakis, speaking at the launch of a publication about his time in office, said.
Ahead of its Time: The New Democracy Government 1990-1993 describes his tenure, and the honorary president of the Conservative party said the crisis hasn’t pushed Greece to the edge of collapse but that its recovery is painfully slow, the newspaper Kathimerini reported.
Highlighting the need to reduce the size of the public sector as well as bureaucracy, Mitsotakis noted that “You can’t have a smaller state without fewer employees.” He didn’t explain why he didn’t do that when he was ruling as international lenders have accused New Democracy and their rival, the PASOK Socialists, of packing public payrolls with hundreds of thousands of needless workers for decades in return for votes.
The coalition government of Prime Minister Antonis Samaras, now the New Democracy leader, has yet to begin laying off public workers either as the Troika of the European Union-International Monetary Fund-European Central Bank (EU-IMF-ECB) said that the government has been dragging its feet although it’s been reported that thousands of public workers will begin being let go as part of austerity measures.
Mitsotakis argued that had his government completed its term the country would not have taken a route toward disaster and wouldn’t be in a crisis now. He also criticized the administrations that came after him, with the exception of a portion of the first part of the premiership of PASOK Socialist Costas Simitis which led to Greece’s admission in the Eurozone, although with economic numbers that critics said were misleading.
Mitsotakis, 94, also spoke of the dangers associated with the rise of extreme right party Golden Dawn. He led the country from April 11, 1990 until October 13, 1993 when his party, accused of allowing the use of the name Macedonia for the Former Yugoslav Republic of Macedonia (FYROM) was weakened by the departure of Samaras, who was his foreign minister.