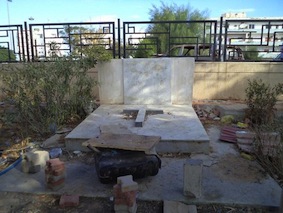 Metropolitan Theofylaktos of Libya met an unsettling scene upon entering the Greek Orthodox Cemetery in Tripoli to conduct an annual memorial service in the memory of the Greek victims of World War II who lost their lives in Libya: it had been victimized by vandals.

The Ambassador of Greece to Libya, George Amiridis, the Ambassador of the Republic of Cyprus to Libya, Perikles Stivaros, the Archimandrite Ioakeim Vasilakos and the president of the Greek Community of Libya Dimitris Anastasiou also attended the ceremony and saw the damage.

Metropolitan Theofylaktos tried to appeal to the Libyan government but noted nothing can be done against such acts since the country is still crumbling.

The Greek Orthodox clergy has been strongly and repeatedly advised not to wear the cassock in public, especially after a failed assassination attempts against Archimandrite Ioakim (Vasilaku), a representative of the Alexandria Orthodox Church, in the yard of the George the Victorious Church in Tripoli in May.

According to a ANA-MPA report, last August a group of people tried to seize the Metropolitan Cathedral and the Metropolis was forced to fence the church with bars and barbed wires. “The situation remains as tense as it used to. Extremists are fueling instability and insecurity in the country. There are some 100 Greek ex-pats still living in Tripoli and Benghazi and we all live in fear and uncertainty. The ones that already left do not even think about returning here, and the business sector is practically inactive since no contracts are being signed” underlined Theofylaktos.