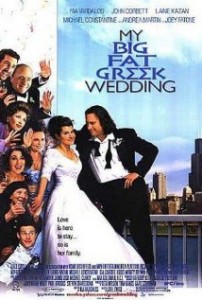 HBO has officially announced that the highest grossing romantic comedy ever will be released on Blu-ray November 13.

“My Big Fat Greek Wedding: 10th Anniversary Special Edition” will feature commentary from Nia Vardalos, co-star John Corbett and director Joel Zwick. Also included are never-before-scenes that didn’t make the final cut, as well as a 30-minute look back at the making of “My Big Fat Greek Wedding,” featuring an exclusive sit-down with Vardalos and Corbett. The film was a hit with critics and audiences alike when it was first released in theaters, and earned Vardalos an Academy Award nomination for Best Original Screenplay, as well as a Golden Globe nomination for Best Actress in a Comedy; it also received a Golden Globe nomination for Best Comedy or Musical.

A few weeks ago, Vardalos leaked some details about the upcoming release of the special edition DVD while promoting her film “McKenna Shoots for the Stars.”