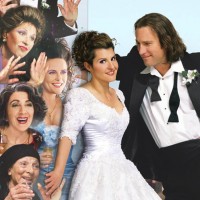 It’s hard to believe that “My Big Fat Greek Wedding” was released in theaters 10 years ago; it seems people are still under the impression Greeks spray windex on everything and will say “orea visia” as a way to express “thank you.” But a decade later, in an online interview, Nia Vardalos mentioned that even though it hasn’t been officially “announced yet,” she and John Corbett – who played her love interest in the film – sat down for the cameras to share stories and spill secrets from the making of “Greek Wedding” for a special tenth anniversary re-release of the DVD scheduled for September.

Vardalos was nominated for an Academy Award for her comedic screenplay about a Greek woman from a traditional family who falls for a non-Greek man. All these years later, she says in the interview that she never gets tired of hearing people talk to her about the film, or share stories about how they married someone outside of their culture.

The Greek-Canadian/American actress and writer is currently promoting the DVD release of her film “McKenna Shoots for the Stars,” which is available July 2.