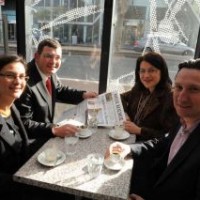 On Monday, head of the Australian Labor party, Daniel Andrews, along with Labor candidate of Greek descent Jennifer Kanis, Shadow Minister for Seniors and the Aging Jenny Mikakos, attended a Greek café at Lonsdale Street in Melbourne to enjoy their morning Greek coffee.

A few minutes later, the president of the Greek community of Melbourne and Victoria, Mr Bill Papastergiadis, joined their company to discuss with the distinguished members of the Labor party about the problems facing the Melbourne-based Greek-Australians. Mrs Kanis was listening with great attention since she is running for the Parliament in the greater region of Victoria.

Both Mr Andrews and Mrs Kanis discussed with Greek store owners of Melbourne about problems regarding their businesses in the broader area and promised to support and preserve the Greek presence at Lonsdale Street.

Mrs Kanis’s main opponent for the election of July 21 is Greens’ Cathy Oke. The Liberal party did not appoint a candidate for this area and thus, should its voters favor the Green party, the election victory appears doubtful for the Labor party, reports Neos Kosmos.