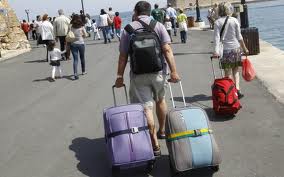 Hotel owners and other professionals of the broader tourism sector are trying hard to change the negative climate. In an interview with Ethnos newspaper, they describe this year’s tourism as “catastrophic,” adding that many tourists have cancelled their reservations during the past months.
Fortunately, after the election and Greece’s remaining in the euro zone, there was a slight increase in bookings, but not so big to “cover” their financial losses.
On Crete, officials in conjunction with many businessmen are making hard attempts to attract even last-minute tourists. Both big and smaller businesses offer discounts of 25-35%, while many have extended many special offers for Greeks as well.
According to Crete-based tourist agents, “about 60-70% of the island’s tourism is ‘all-inclusive’ which means that in luxurious hotels, visitors pay 50-55 euros per person for accommodation, food and drinks.” But there are even cheaper hostels, charging 10-15 euros per person, including breakfast!
The past two months were completely negative for the Cyclades, too. Hotels, apartments and studios as well as camp sites saw their rooms and businesses empty.  They are hedging a small hope that they will be able to increase their income a bit for the months of July and August. They say they will not be able to turn a profit this year but only pay their taxes and debts.
Another famous Greek resort located in northern Greece, Chalkidiki, has announced its low visiting rates during May and June. With further offers and discounts, professionals of seaside Chalkikidi are trying to attract more tourists, especially from Bulgaria. Snack food, beers and local sweets are included in the accommodation offers while prices for a 7-day-vacation have seriously fallen.
Despite the negative climate, Corfu, Santorini, Chania and Mykonos  have shown, only after the June 17th election, an increase by 82%, 74%, 76% and 27% respectively.
On the contrary, Athens appears to be trailing with 2% less visitors than in 2010 while most people who have already booked their vacation to Greece come from the USA, Italy and England; German visitors show a 2 % drop.