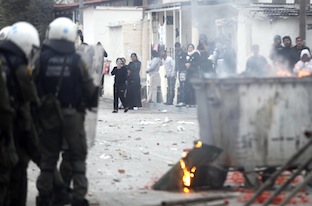 Dozens of ROMA youths have been clashing with police after a 7-year-old girl was accidentally killed by a police motorcycle.
The police motorcycle hit the girl outside a ROMA settlement in the Menidi suburb of western Athens. According to eye witnesses, the girl was together with other children to sing the Epiphany carols, when she suddenly sprang on the road.
Dozens of angry family members, relatives and settlement residents gathered at the spot of the accident after rumors that the policeman had abandoned the heavily injured girl.
The youths hurled rocks, molotov cocktails and flares to riot police that came to the area and set trash bins on fire. Police used tear gas to disperse the crowd.
The anger of the ROMA targeted also a passing by train. They threw stones against the train, blocking for some hours the railway.
The girl died in the hospital where she was taken shortly after the fatal accident.
Police said a 22-year-old police office was arrested in connection with the girl’s death and is going to be charged.
Meanwhile tensions have been diffused.
More than 120,000 Gypsies, or ROMA, live in Greece, according to government estimates.  Almost half of them live in tents and shacks in settlements outside cities across the country, some with poor sanitation and no electricity or running water.