Two very talented young people made Greece proud with their recent success in technology. Kostas Eleftheriou, 26 and Panos Petropoulos, 38 are the designers of BlindType.  BlindType is a new cutting edge application which is used to make typing easier and more accurate in touch screen devices. What does BlindType do? It eliminates touch typing frustrations, allows for super sloppy typing, helps you type easier and faster and constantly adjusts to the user’s “perceived” keyboard and typing style.
Their creation was recently bought by Google! According to Panos success didn’t happen, but it certainly came over night! Here is the exclusive interview that he kindly gave to the Greek Reporter.

How did you decided to leave management and be involved with technology and computer programming?

Since I was 12-13 years old I remember that my mother used to scowl me for spending all my free time in computer games. I would never let got of my old Spectrum. My love for computers continued for many years but I finally decided to study marketing management. Back then there were no computer studies in Greece and for personal reasons I didn’t want to study abroad. It took me 5 years to finish my Bachelor degree. This definitely proves that I wasn’t really interested in it.

And how did you get in US?

Tell us a bit about your cousin, Kostas Eleutheriou. He is the one who created iSteam, right?

Kostas is a very talented programmer. He left Greece to study in UK. His thesis was very brilliant. He created some very impressive artificial intelligence mini cars. After he left University and worked for another foreign currency exchange company. He created the whole backbone of the company and then he made his own company and created iSteam which had 3 million downloads. He decided to move in San Francisco and specifically the Silicon Valley, which is home to many of the world’s largest technology companies. 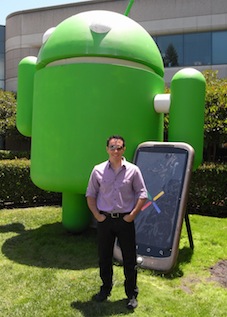 How the inspiration for Blind type came?

It all started one and a half year ago. As I already mention Kostas is very into artificial intelligence programmes. He started wondering how it is possible that a simple problem such as Fat Fingers hadn’t been solved. Technology is incredibly developed today. We can code the DNA, but we cannot write using a screen keyboard? It seemed observe! He had this idea which was unique, started working it and when he saw that it can happen we started working together.

How much did you work to achieve this success?

I recall those last 3 weeks at the end of the project and I just wish I will never have to go through something like this again! We worked non stop. We literally didn’t know if it was day or night outside. I would just go to the grocery stop to buy something to it and then come back and continue. But this is the way to be the best, when you really love what you do.

After BlindType was ready all you did was to promote it was a simple webpage which presented the product and showed hoe with you can use it to eliminate touch typing frustrations. Did you expect this outstanding feedback?

No, certainly not! All we did was creating the website and just posting it in a Greek Blog about technology. We wanted to present it in Greece first to see what people thought. And then we just went to bed. When we woke up it was everywhere. All the major technology websites were mentioning it. Within the first 24 hours we started receiving offerings.

Apart from Google, did you have offers from other major companies?

The most successful companies in the world approached us for BlindType. But I’m really sorry; I can’t say anything else about this. 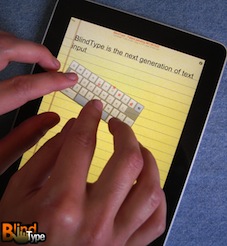 How did your family react to this success?

Well, to tell you the truth, we couldn’t tell them right away, due to the confidentiality agreement we had signed. We couldn’t even share it with our closer family, until the deal with Google became public information. This is a standard practice followed by all major companies. Of course, when they finally were informed they were extremely happy.

Do you believe you would be able to accomplish a success like this one if you hadn’t left Greece for US?

No, in no case. But, I don’t think Greece has anything to do with that, in this case. The Silicon Valley was definitely the place to be for us, because Google is there, Apple is there etc. Nevertheless I do think the bureaucracy in Greece is just chaotic. To start a company in US it takes 15 minutes, here it needs a huge paperwork. Also, the law is hostile to businesses. When you make an effort and succeed they make you pay extraordinary contribution.

How was living in US for you?

The quality of life there in amazing. You feel safe to walk out in the street, there is fresh air, it is quiet, and people are polite. But after a while, you realize that there are too many rules in everyday life. And of course the health system is just disappointing. Just before I go my cousin got sick with high fever. He went to a hospital where they gave him a bunch of vaccines and then made him pay 3000 dollars! However I do trust America is the land of opportunity. I met a man that left Crete 30 years ago with nothing in his pocket. Today he owns an 8 millions dollar block in US. And he told me that America rewards the ones that work hard and rejects the ones that don’t.

So, why do you think Greeks achieve more abroad that inside Greece?

In countries such as the US if you work at a company and you are very good and productive, your supervisor will find a why to promote you. In Greece the best is the one most likely to be fired, because he is the one who makes everybody else look bad. This is the situation, unfortunately. We don’t act as a social group. We only think our own personal good.

What do you think the new generation should do? Stay in Greece or go after a better future abroad?

Definitely, try their luck abroad. In US there are many still opportunities. I, myself was asked when I was in Silicon Valley if I knew any programmer from Greece willing to work there. I posted this in a blog and as far as I know many was interested. I know that in fact one guy from Larissa, replied to the add and then left his wife and kids and got a good paying job. He took the risk! But there aren’t many who would do that.

What are your plans for the future?

I can’t be sure yet. I think that I have achieved many of my goals and feel like lying back for a while. All these endless working hours have undoubtedly had a cost in my personal life and I think that should be more focused on this for a while. It’s a matter of priorities really.

The interview reflects Panos Petropoulos’ personal views only and not Google’s.

Watch this video to find out how BlindType makes typing with a touch screen better!