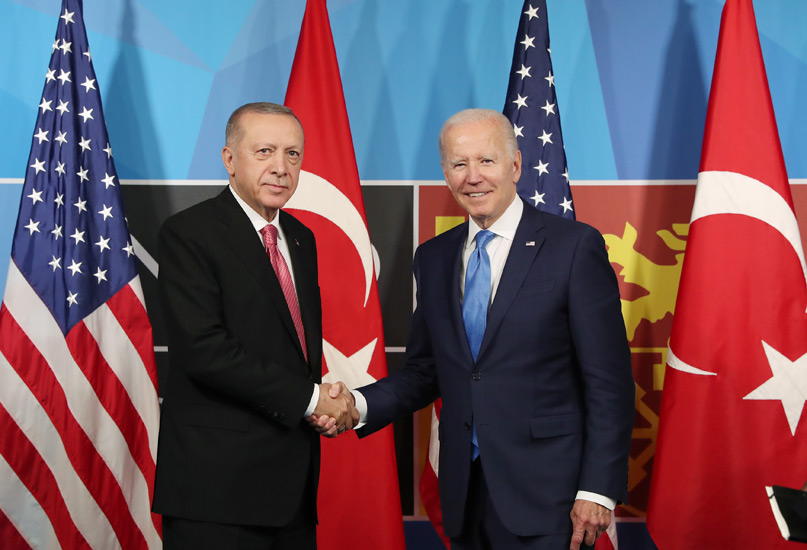 US President Joe Biden discussed “the importance of maintaining stability in the Aegean” with his Turkish counterpart, Recep Tayyip Erdogan, according to a White House statement issued after the meeting of the two leaders on the margins of the NATO summit in Madrid.

Biden thanked Erdogan for dropping opposition to the entry of Finland and Sweden into NATO. “I want to particularly thank you for what you did putting together the situation with regard to Finland and Sweden,” Biden told Erdogan.

A senior US official expressed strong backing for Turkey’s wish to upgrade its air force with new F-16 fighter planes and improvements to its existing older fleet.

The US denies Turkey asked for concessions for Finland, Sweden NATO bids

The warm words from Biden and apparent boost for the delayed F-16 purchases came a day after Turkey surprised fellow NATO members by suddenly dropping weeks of opposition to the Finland and Sweden applications to join the alliance, where unanimous consent is required for enlargement.

On Tuesday, a senior US official stressed that Turkey had not asked for any “particular concession” to give its green light.

“There’s nothing the United States offered in direct connection with this,” the US official said, according to AFP after Turkey ended that obstruction.

“Nothing about Turkish requests to the United States was part of this agreement. This is an agreement strictly among the three countries—Turkey, Finland, Sweden,” the official said, and “The United States is not a part of it.”

Biden, Erdogan discussed the importance of stability in the Aegean

According to the White House briefing, “The leaders discussed their continued support for Ukraine in its defense against Russian aggression, as well as the importance of removing Russian obstacles to the export of Ukrainian grain,” the statement continued.

“They also talked about the importance of maintaining stability in the Aegean and Syria,” it said.

“President Biden reiterated his desire to maintain constructive bilateral relations, and the leaders agreed on the importance of continued close consultations between our governments,” the statement concluded.