On Thursday, Greece’s Ministry of Foreign Affairs published sixteen maps that document Turkey’s challenge to Greek sovereignty in the Aegean from 1972 up to today.

In a statement, the ministry said that the maps that begin chronologically with the status quo enshrined in the Lausanne (1923) and Paris (1947) Treaties “depict in a vivid and irrefutable way the Turkish illegal unilateral actions and claims.”

Turkish claims are then presented, beginning with the illegal licensing of the Turkish state oil company (TPAO) for exploration of oil fields in areas of the Greek continental shelf in the North Aegean in 1973 and continuing with the attempt to usurp Greece’s responsibility for Search and Rescue services in half of the Aegean in the 1980s.

In the 1990s, Turkey endorsed the “grey zone” theory and further escalated its provocations with the granting of new licenses in the Eastern Mediterranean, the Greek Ministry of Foreign Affairs says.

The endorsement of the “Blue Homeland” as an official doctrine, the “Turkish-Libyan Memorandum,” and the Turkish theory of the demilitarization status of the Aegean islands follow.

“The maps document the extent of Turkish revisionism in order to upend the status quo, violating International Law and the International Law of the Sea, and threatening peace, security, and stability in our region,” Athens says.

MAP 1 – 1923: Relinquishment by Turkey of all sovereignty over islands beyond the distance of three miles from the Anatolia coast 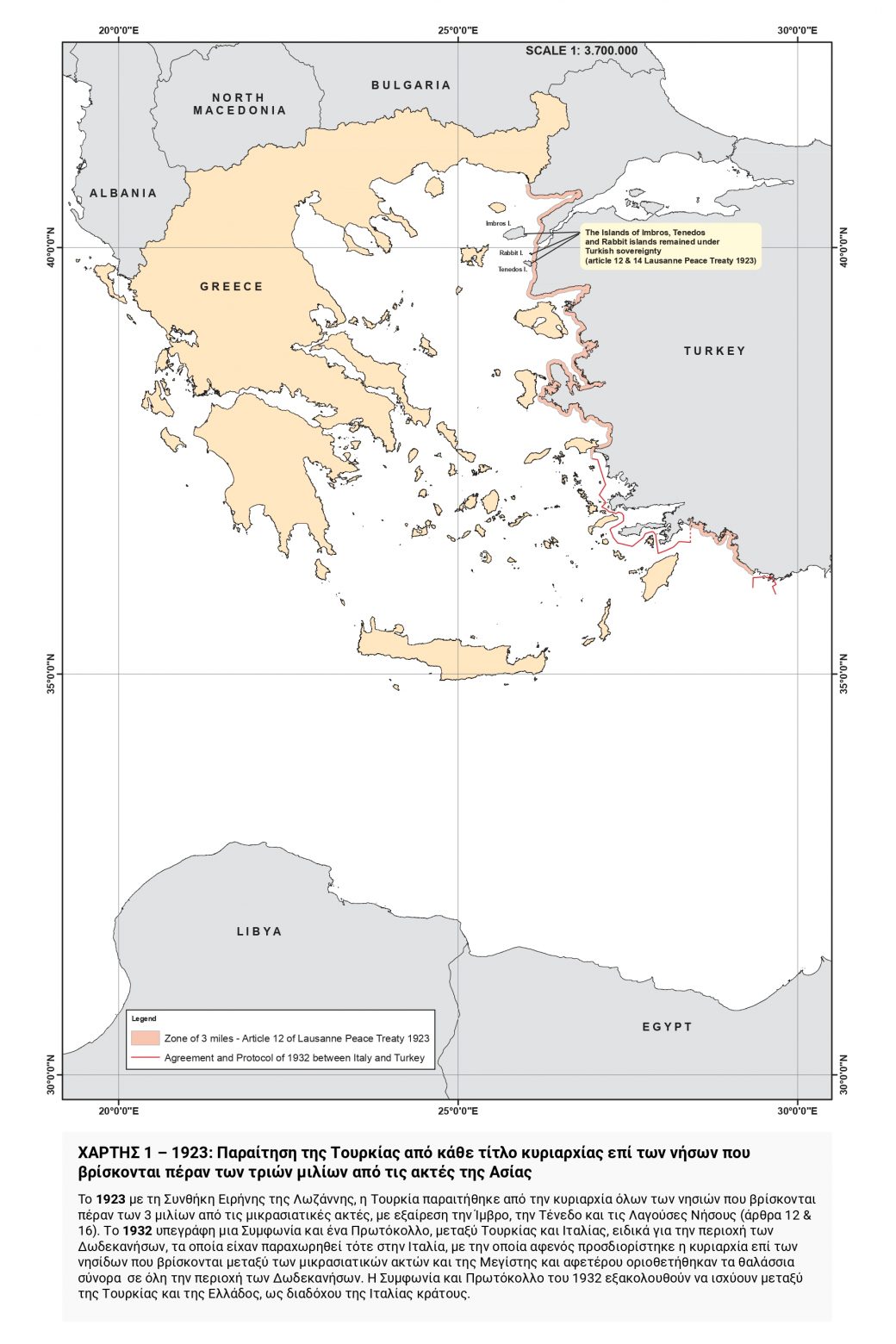 In 1923, with the Lausanne Peace Treaty, Turkey relinquished sovereignty over all islands beyond three miles from the Anatolia coast with the exception of Imvros, Tenedos, and the Lagouses (Rabbit) Islands (Articles 12 & 16).

In 1932, an Agreement and a Protocol were signed between Turkey and Italy, specifically for the Dodecanese area, which had been ceded to Italy at that time and by which, on the one hand, sovereignty over the islands between the Anatolia coast and Megisti was determined and, on the other hand, the maritime boundaries were delimited throughout the Dodecanese area. The 1932 Agreement and Protocol remain in force between Turkey and Greece, as the successor state to Italy. 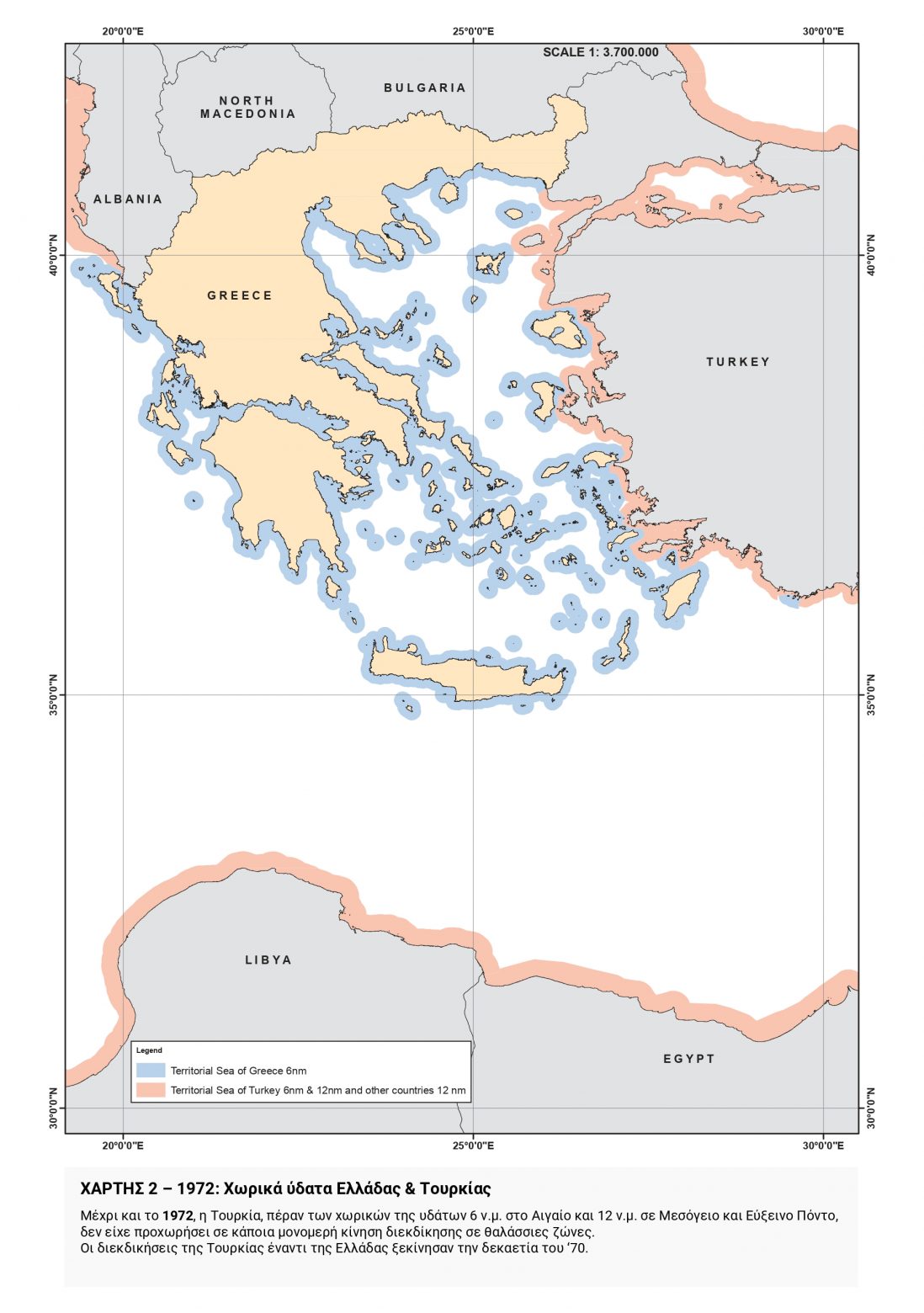 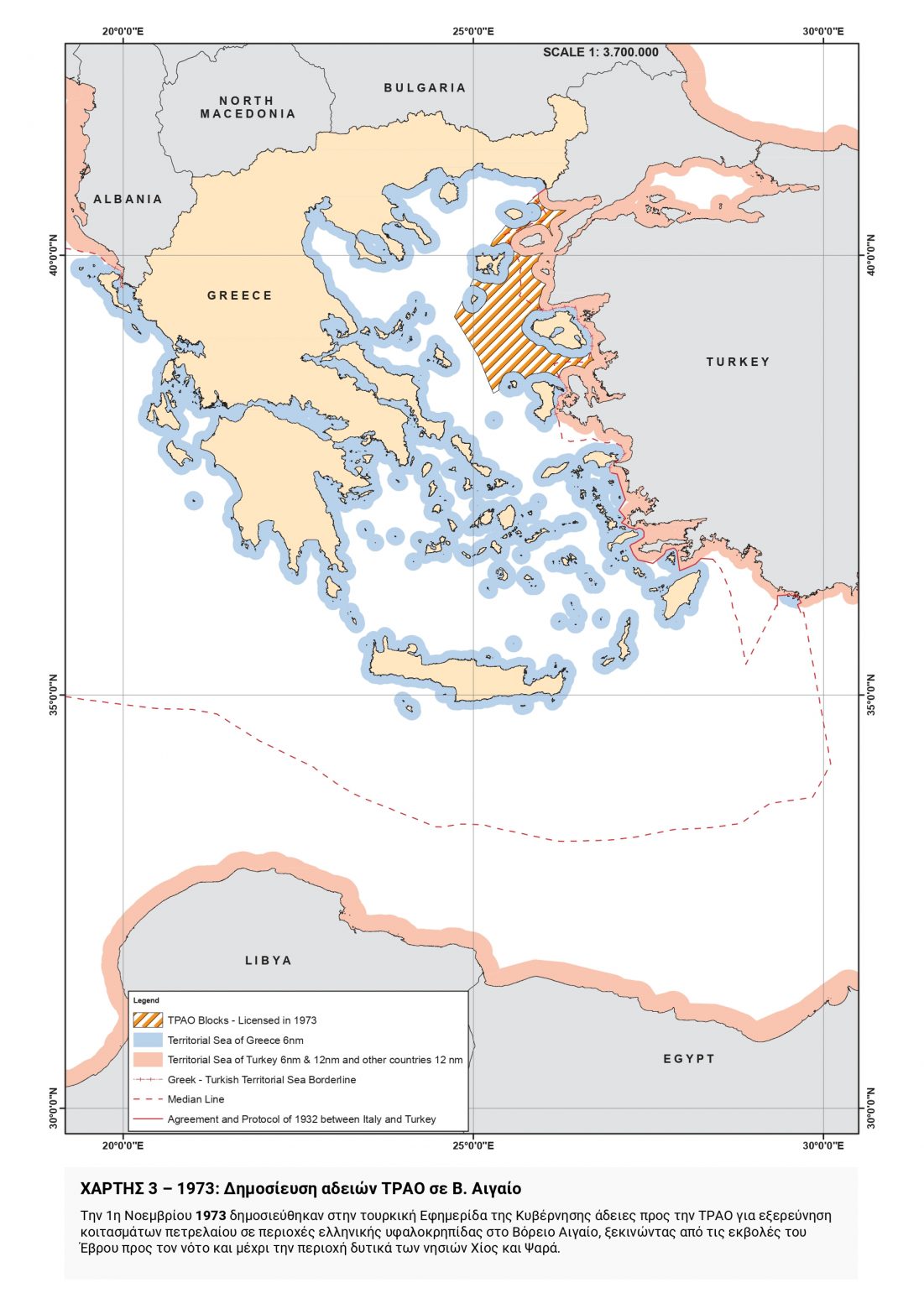 On November 1, 1973, licenses were published in the Turkish Government Gazette for Turkish Petroleum Corporation (TPAO) to explore for oil deposits in areas of the Greek continental shelf in the North Aegean starting from the Evros estuary southwards to the area west of the islands of Chios and Psara.

MAP 4 – 1974: Publication of new TPAO licenses in the Aegean and between Rhodes and the Kastellorizo complex 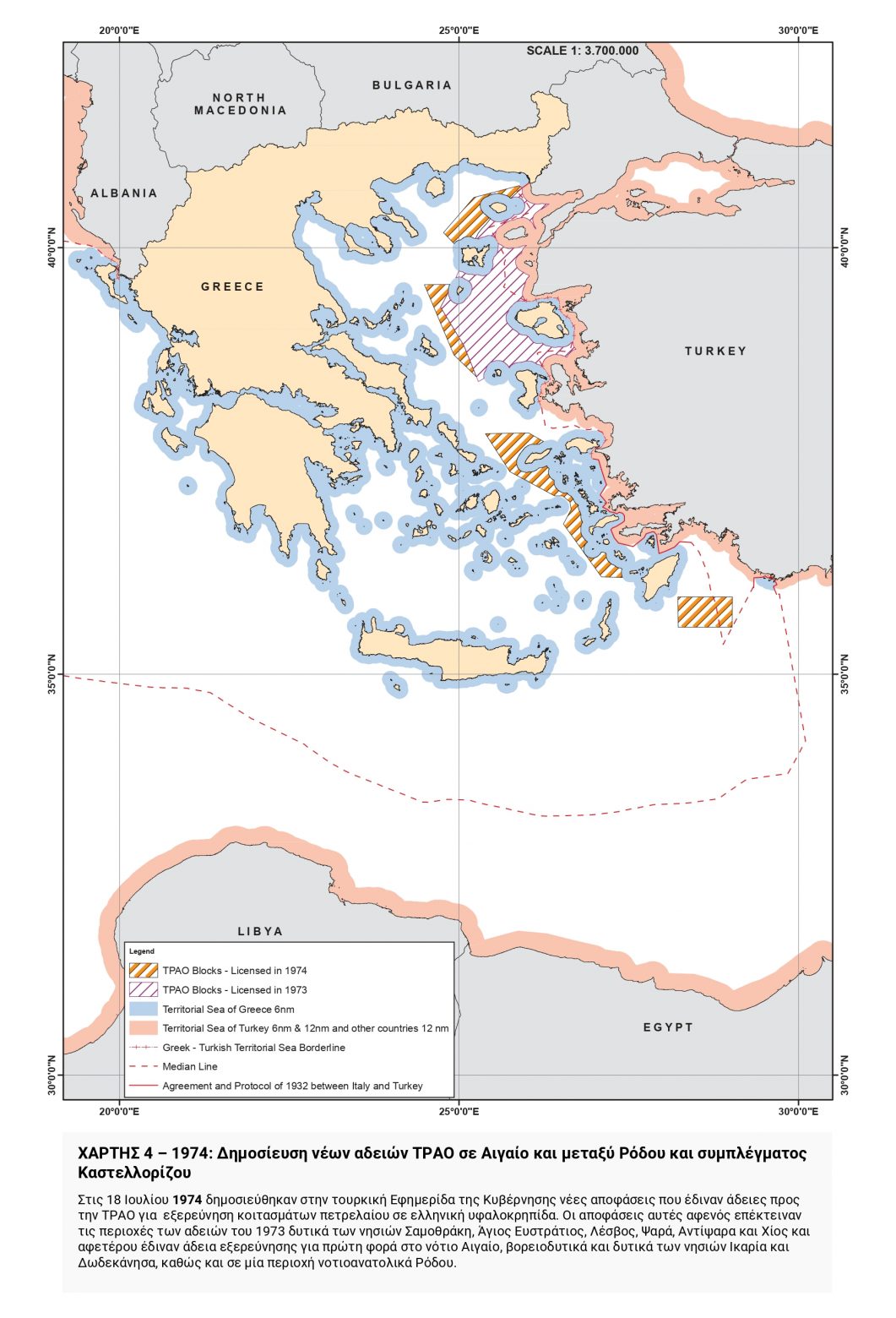 On July 18, 1974, new Decisions were published in the Turkish Government Gazette granting licenses to TPAO for exploration of oil reserves on the Greek continental shelf. These decisions both extended the areas of the 1973 licenses west of the islands of Samothrace, Agios Efstratios, Lesvos, Psara, Antipsara, and Chios, and, for the first time, granted permission to explore in the southern Aegean, northwest and west of the islands of Ikaria and the Dodecanese, and in an area southeast of Rhodes.

MAP 5 – Publication of Turkish Search and Rescue (SAR) Regulation, which defines an area of responsibility covering half of the Aegean Sea 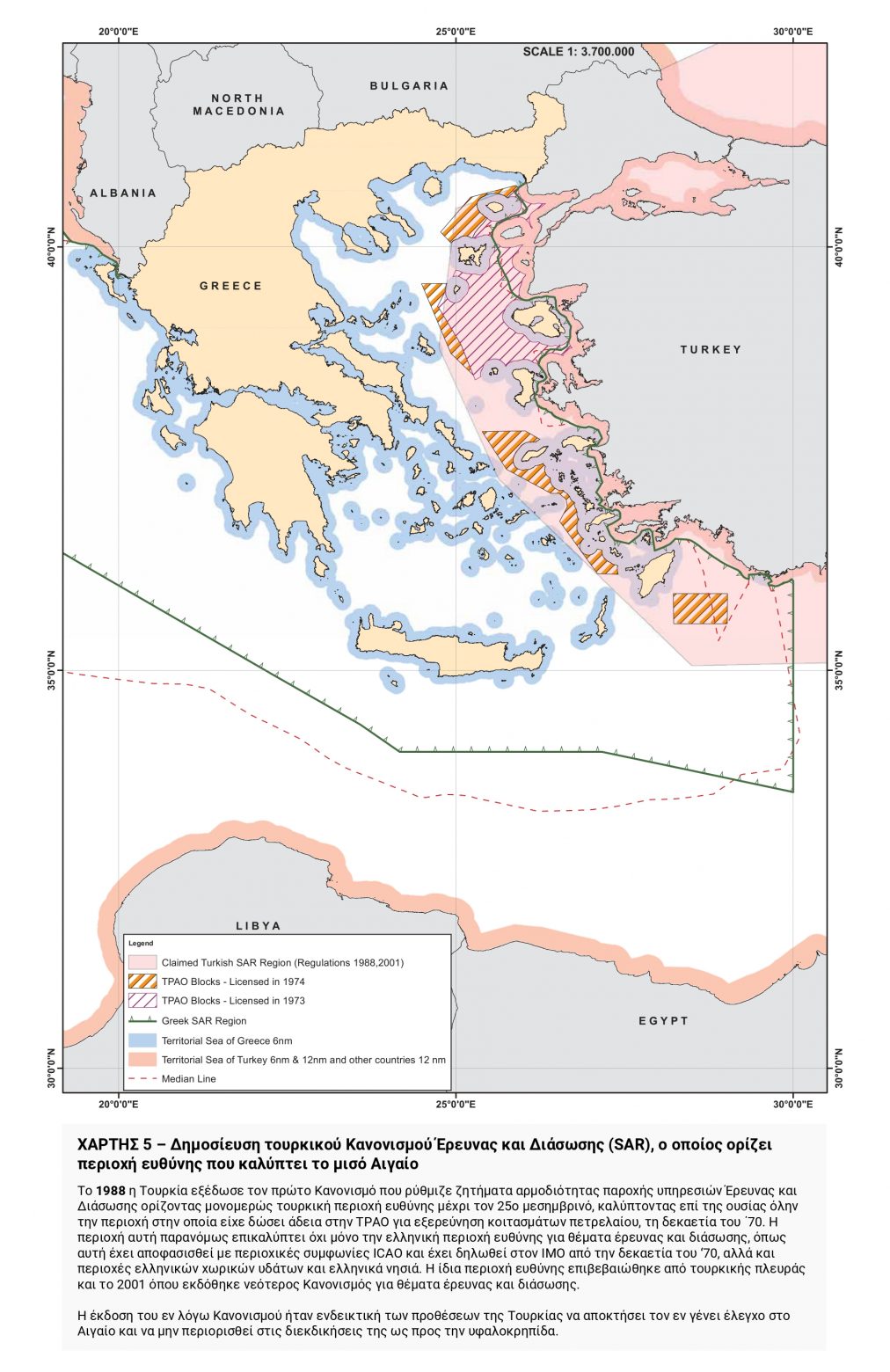 The publication of this Regulation was indicative of Turkey’s intentions to obtain full control of the Aegean rather than confine itself to claims to the continental shelf.

MAP 6 – 1996: Turkish theory on the existence of islands of indeterminate sovereignty (“grey zones”) 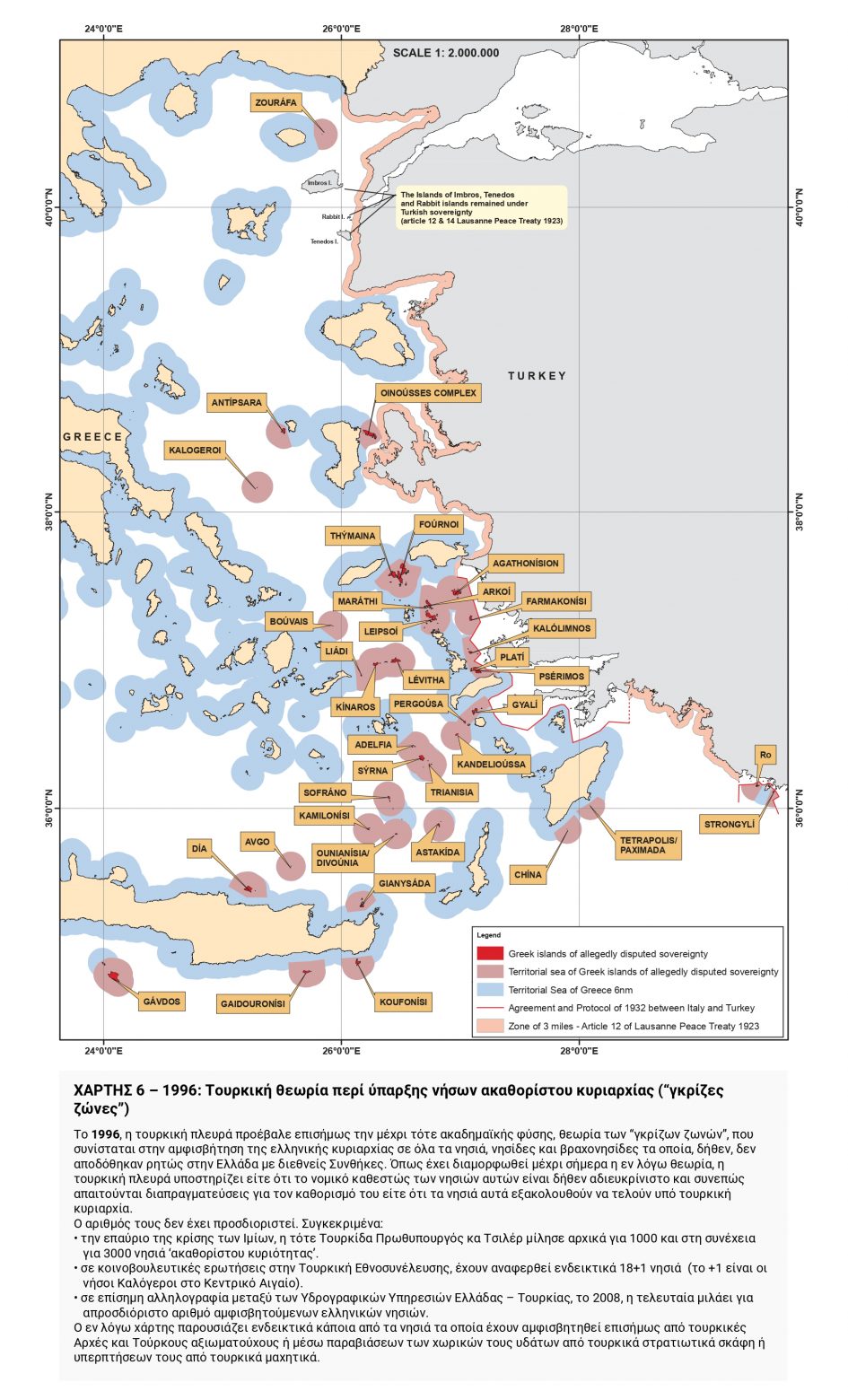 In 1996, the Turkish side officially put forward the theory of “grey zones”—until then of an academic nature—which contests Greek sovereignty over all the islands, islets, and rocks which, allegedly, were not explicitly ceded to Greece by international treaties.

As this theory has developed so far, the Turkish side maintains either that the legal status of these islands is allegedly unclear and therefore negotiations are required to determine it or that these islands are still under Turkish sovereignty.

Their number has not been determined. These are outlined as follows below.
• In the aftermath of the Imia crisis, the then Turkish Prime Minister Ms. Çiller spoke first of 1000 and then of 3000 islands of indeterminate sovereignty.
• During debates on parliamentary questions in the Turkish National Assembly, indicatively 18+1 islands have been mentioned (the +1 being the Kalogeri islands in the Central Aegean).
• In official correspondence between the Hydrographic Services of Greece and Turkey in 2008, the latter speaks of an unspecified number of disputed Greek islands.

This map indicatively portrays some of the islands that have been officially disputed by Turkish authorities and officials or through violations of territorial waters by Turkish Navy vessels or overflights by Turkish fighter aircraft. 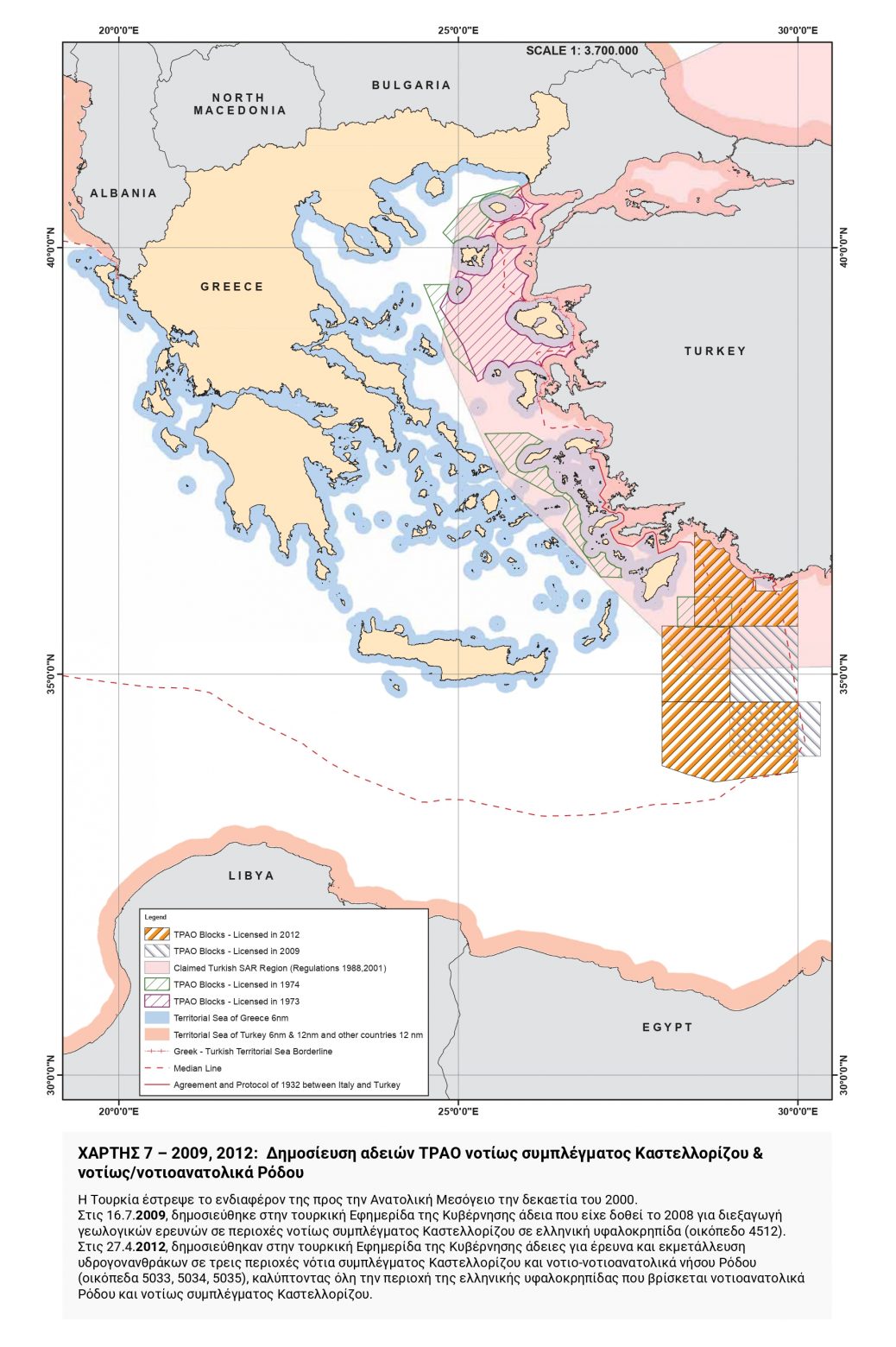 Turkey turned its attention to the Eastern Mediterranean in the 2000s. On July 16, 2009, a license that had been granted in 2008 for geological surveys in areas south of the Kastellorizo complex on the Greek continental shelf (field 4512) was published in the Turkish Government Gazette. 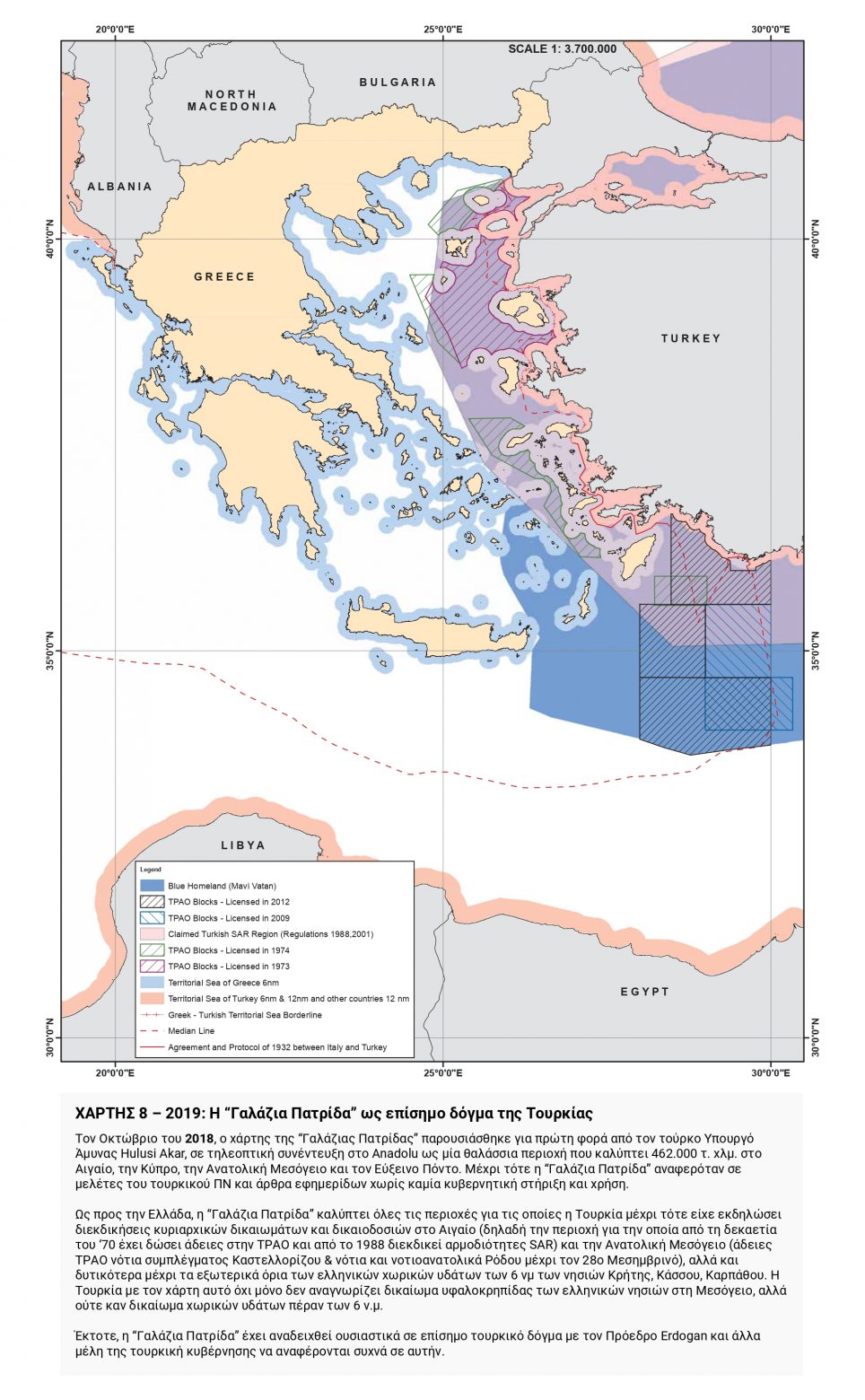 In October 2018, the map of the “Mavi Vatan” (Blue Homeland) was presented for the first time by Turkish Defense Minister Hulusi Akar in a TV interview with Anadolu as a maritime area covering 462,000 square kilometers in the Aegean Sea, Cyprus, the Eastern Mediterranean, and the Black Sea.

Until then, the term “Mavi Vatan” (Blue Homeland) was exclusively mentioned in Turkish Navy studies and newspaper articles without any endorsement or use by the Turkish government.

As far as Greece is concerned, the “Mavi Vatan” (Blue Homeland) encompasses all areas in which Turkey had until then raised claims to sovereign rights and jurisdiction in the Aegean Sea [i.e. the area for which it has licensed TPAO since the 1970s and has claimed SAR (Search and Rescue) responsibilities since 1988], as well as in the Eastern Mediterranean (licenses to TPAO from south of the Kastellorizo complex & south and southeast of Rhodes up to the 28th Meridian), but also further west to the outer limits of the Greek territorial waters of 6 nautical miles off the islands of Crete, Kassos, and Karpathos.

With this map, not only does Turkey not recognize the right to the continental shelf of the Greek islands in the Mediterranean, but also disputes the right to territorial waters beyond six (6) nautical miles.

Since then, the “Mavi Vatan” (Blue Homeland) has effectively become an official Turkish doctrine with President Erdoğan and other members of the Turkish Government referring to it on a regular basis.

MAP 9-2019: Announcement to the UN of the claimed Turkish continental shelf as far as the 28th parallel—Signing of the Turkish-Libyan Memorandum 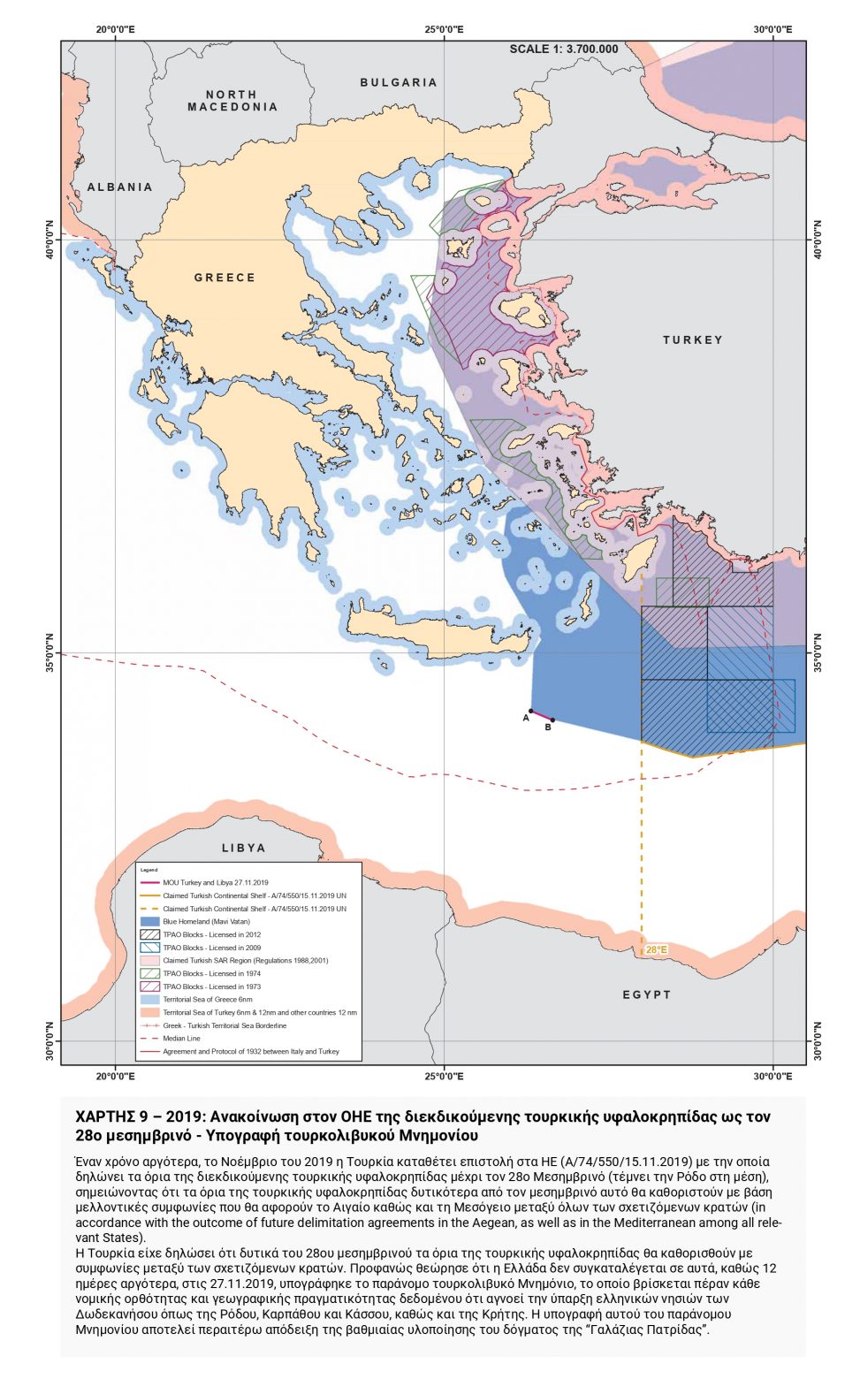 One year later, in November 2019, Turkey submits to the UN a formal letter (A/74/550/15.11. 2019) declaring the limits of the continental shelf claimed by Turkey up to the 28th Meridian (intersecting Rhodes in the middle), noting that the limits of the
Turkish continental shelf further west of this Meridian will be determined among relevant states (“in accordance with the outcome of future delimitation agreements in the Aegean, as well as in the Mediterranean among all relevant States”).

Turkey had stated that the limits of the Turkish continental shelf west of the 28th Meridian would be determined by agreements between the relevant States.

Apparently, it considered that Greece is not included in them, as twelve days later on
November 27, 2019, the illegal Turkish-Libyan Memorandum was signed, which goes beyond any legal correctness and geographical reality since it ignores the existence of the Greek islands of the Dodecanese, such as Rhodes, Karpathos, and Kassos, as well as that of the island of Crete.

The signing of this illegal Memorandum is further proof of the gradual implementation of the “Mavi Vatan” (Blue Homeland) doctrine.

MAP 10 – 2020: submission to the UN of a map with the limits of the continental shelf claimed by Turkey 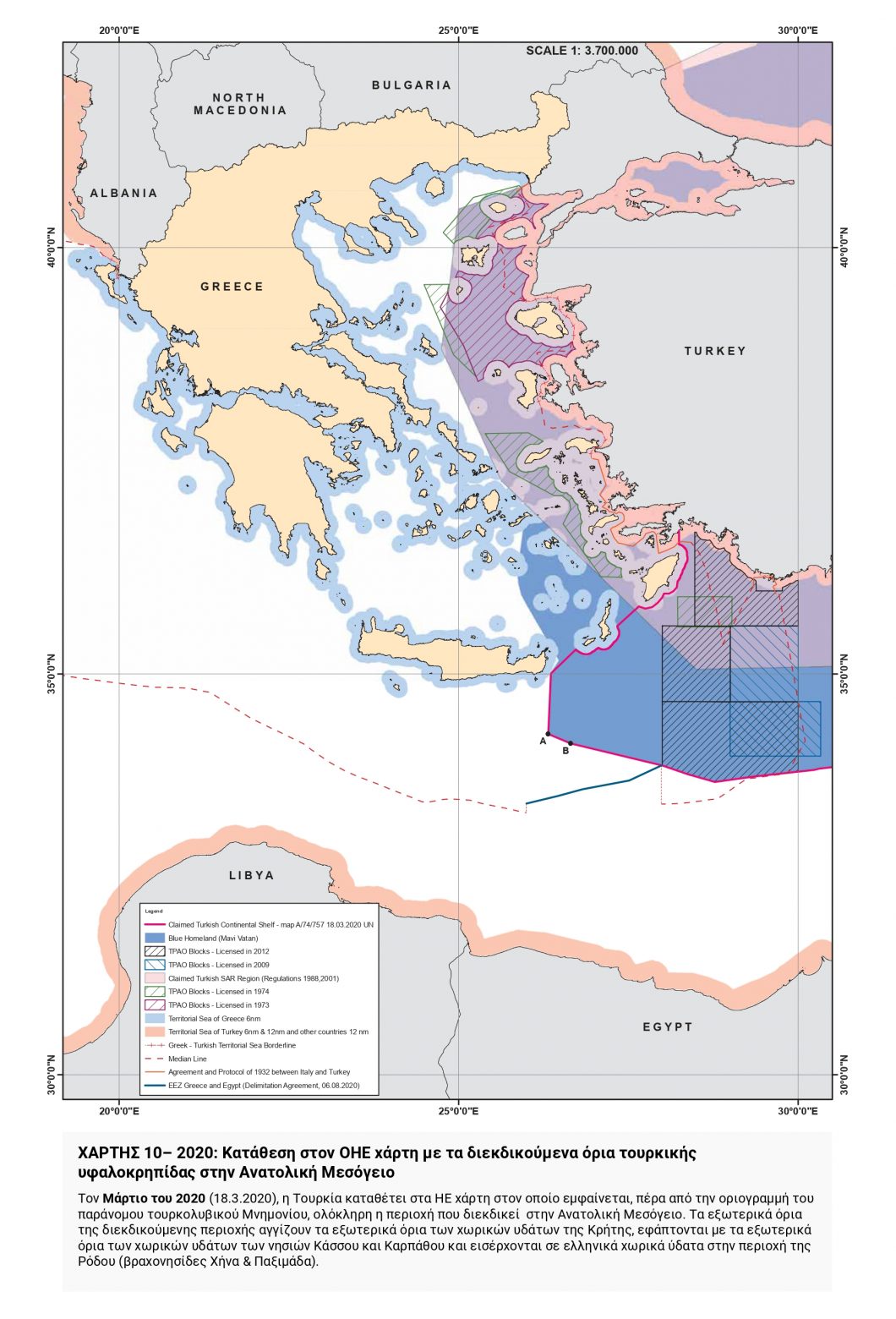 In March 2020 (18.3.2020), Turkey submits to the UN a map depicting, beyond the boundary line of the illegal Turkish-Libyan Memorandum, the entire area it claims in the Eastern Mediterranean.

MAP 11 – 2020: Publication of TPAO’s applications for hydrocarbon exploration license in the area of the Turkish-Libyan Memorandum 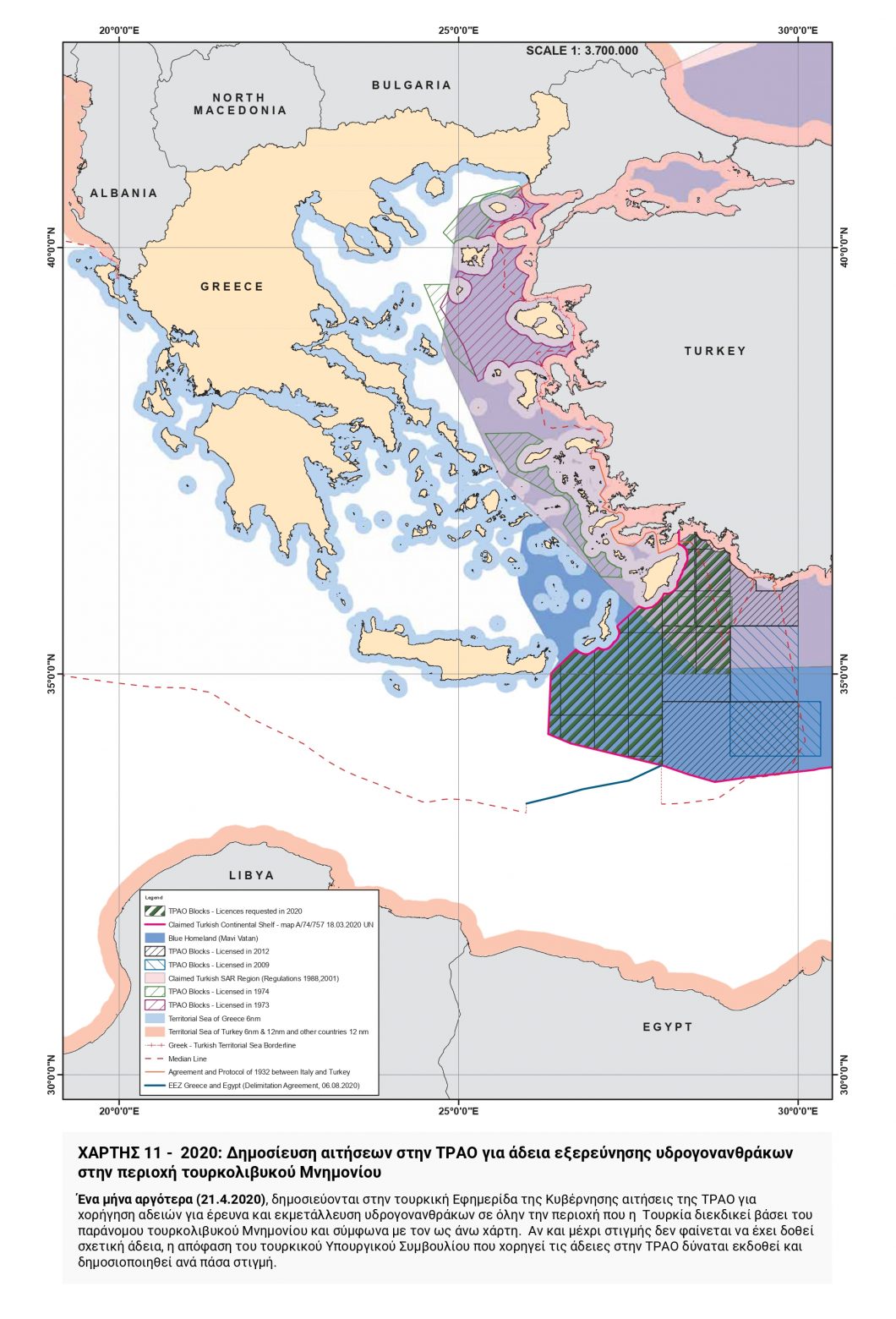 A month later (21.4.2020), TPAO’s applications for hydrocarbon exploration and exploitation licenses for the entire area claimed by Turkey under the illegal Turkish-Libyan Memorandum and as depicted in the above map, are published in the Turkish Government Gazette.

Although no license appears to have been granted thus far, a decision of the Turkish Council of Ministers granting license to TPAO may be issued and published at any time.

MAP 12 – 2020: Extension of the area of responsibility for Search and Rescue claimed by Turkey 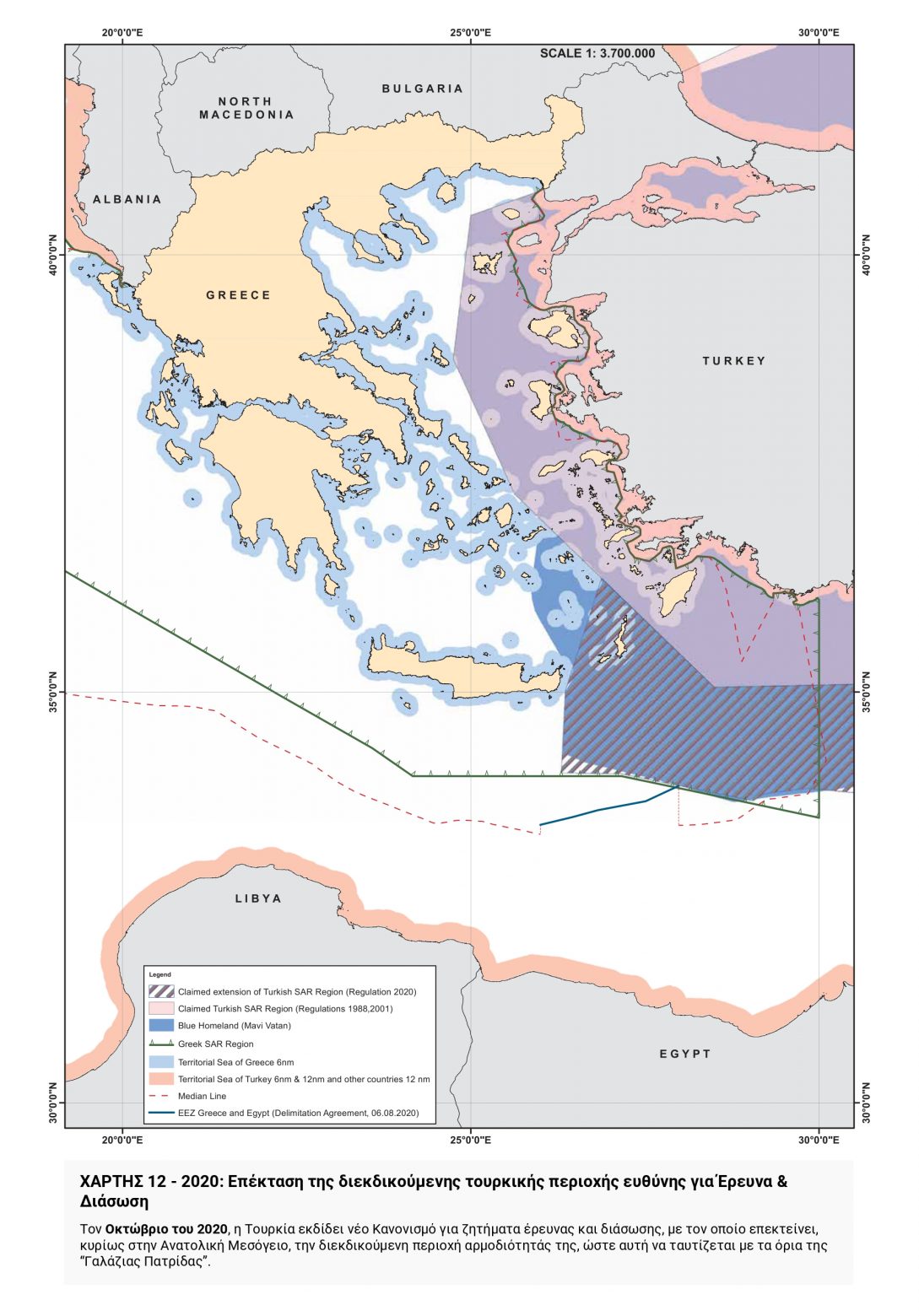 In October 2020, Turkey issues a new Regulation on Search and Rescue Issues by which it extends the area of responsibility it claims, mainly in the Eastern Mediterranean, to coincide with the boundaries of the Blue Homeland. 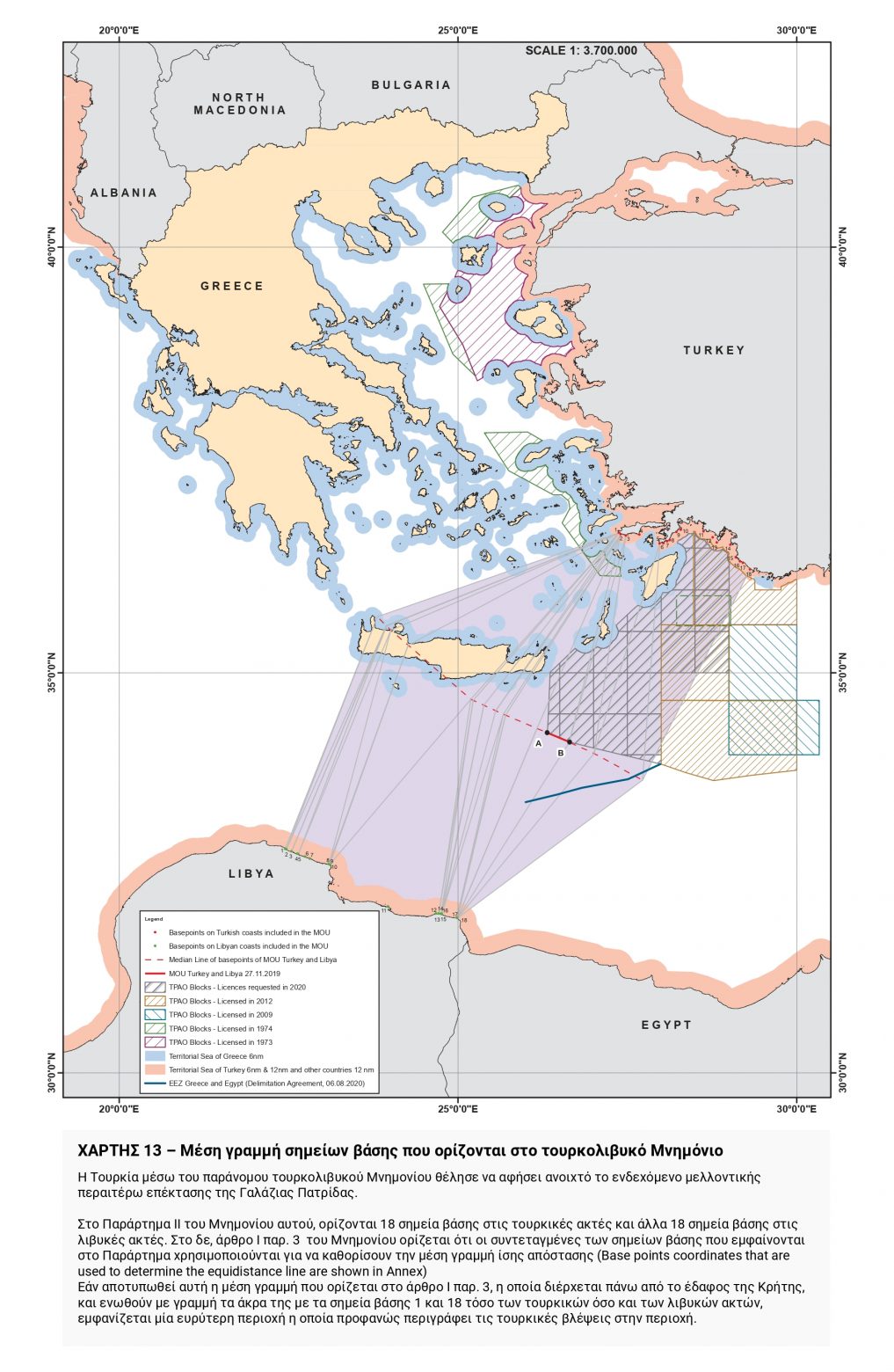 Through the illegal Turkish-Libyan Memorandum, Turkey sought to leave open the possibility of further extension of the Blue Homeland in the future.

Article 1(3) of the Memorandum states that “base points coordinates that are used to determine the equidistance line are shown in Annex.”  If this equidistance line, as defined in Article 1(3), is drawn  (passing through the territory of Crete), and if its ends are
joined by a line to base points 1 and 18 on both the Turkish and Libyan coasts, a wider area emerges which clearly illustrates Turkish intentions in the area.

MAP 14 – 2021: The Turkish theory on the demilitarized Greek islands 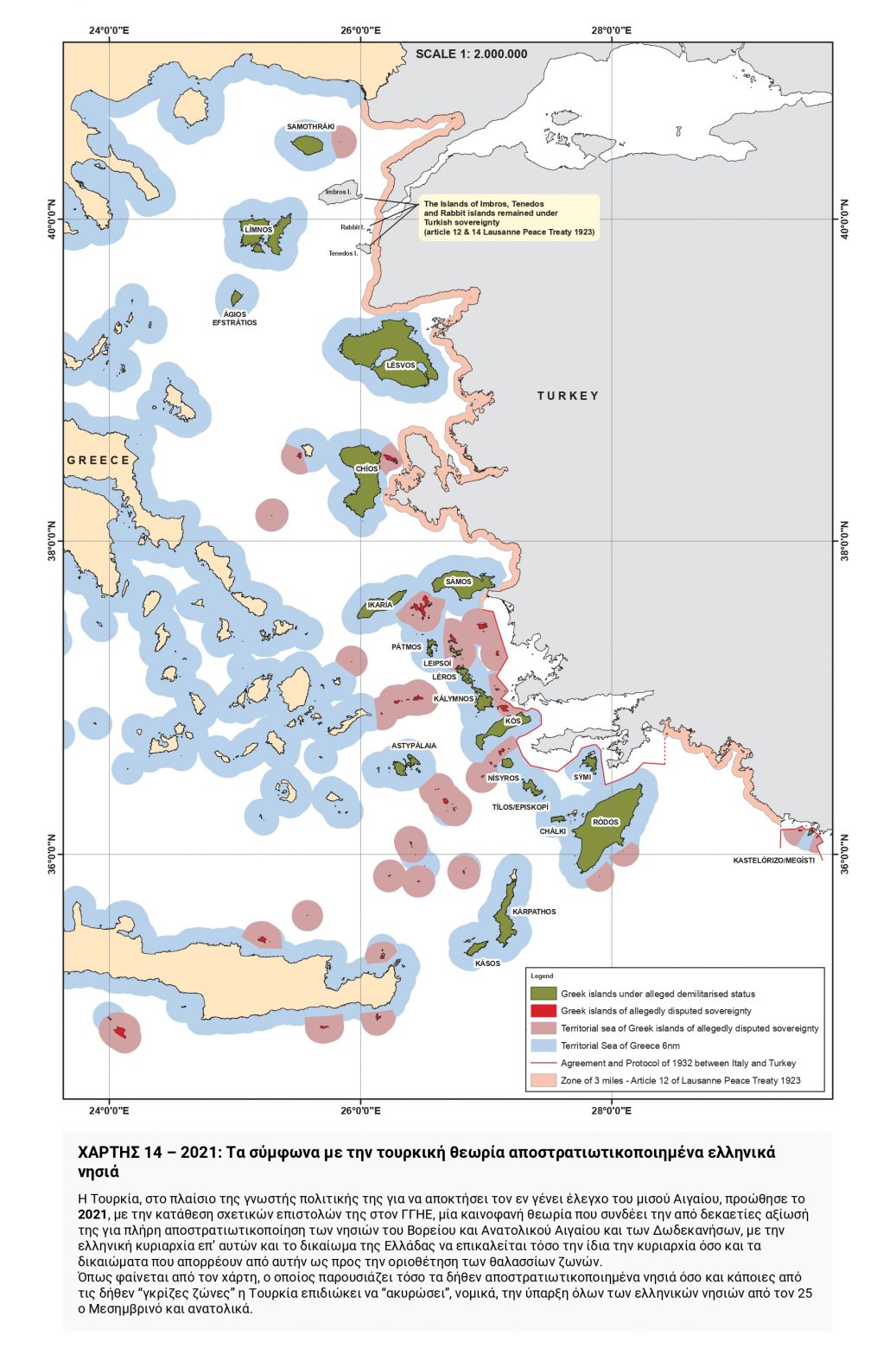 In the context of its well-known policy to obtain the full control over half of the Aegean, Turkey promoted in 2021, with the submission of letters to the UN Secretary General, a novel theory linking its decades-old claim for the complete demilitarization of the islands of the North and East Aegean, and the Dodecanese, with Greek sovereignty over them and Greece’s right to invoke both sovereignty itself and the rights derived from it with regard to the delimitation of maritime zones.

As can be seen on the map, which depicts both the allegedly demilitarized islands and some of the alleged “grey zones,” Turkey seeks to legally “nullify” the existence of all Greek islands from the 25th Meridian and eastwards. 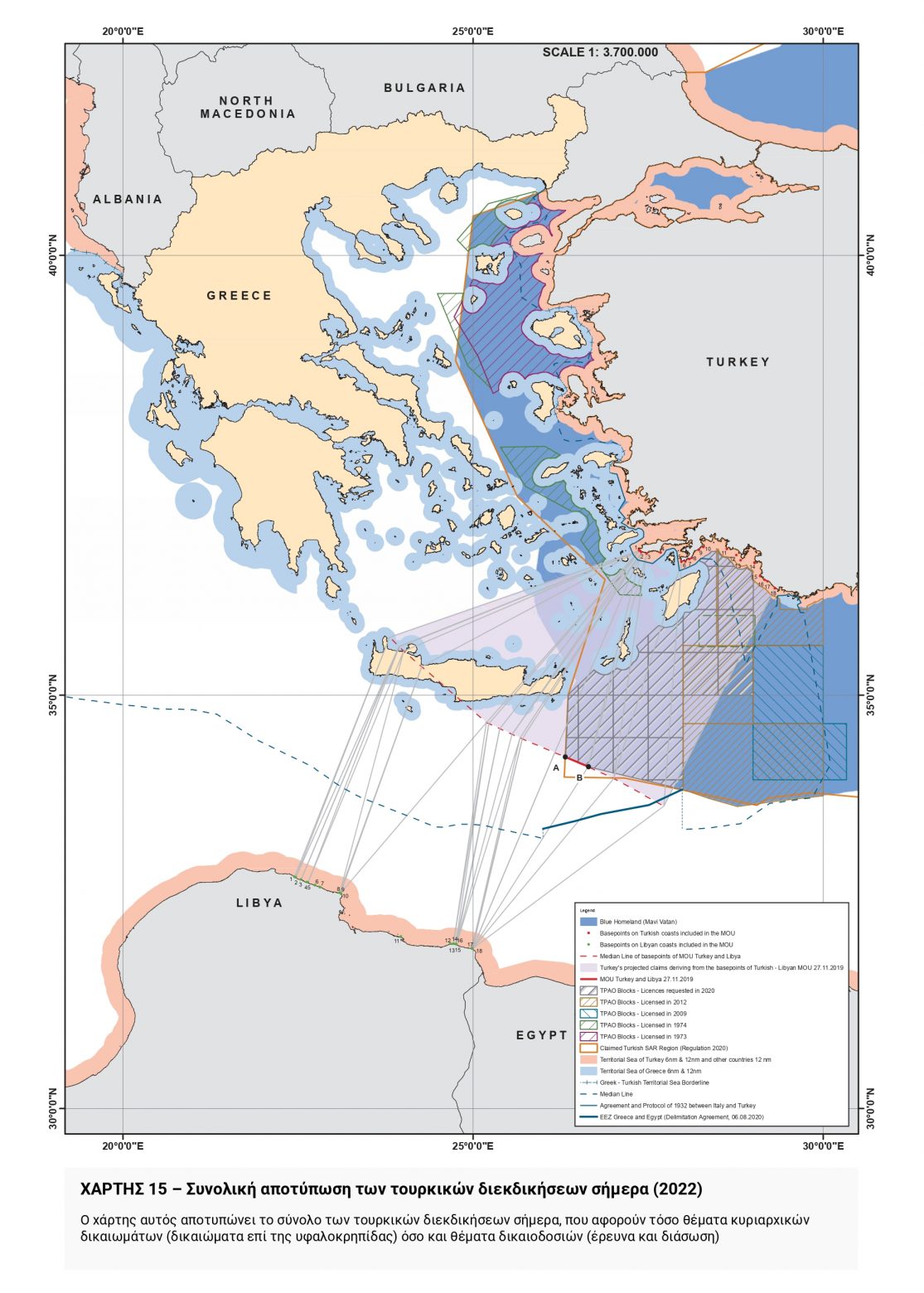 This map depicts the current Turkish claims in their entirety, including both sovereignty issues (rights over the continental shelf) and jurisdictional issues (search and rescue). 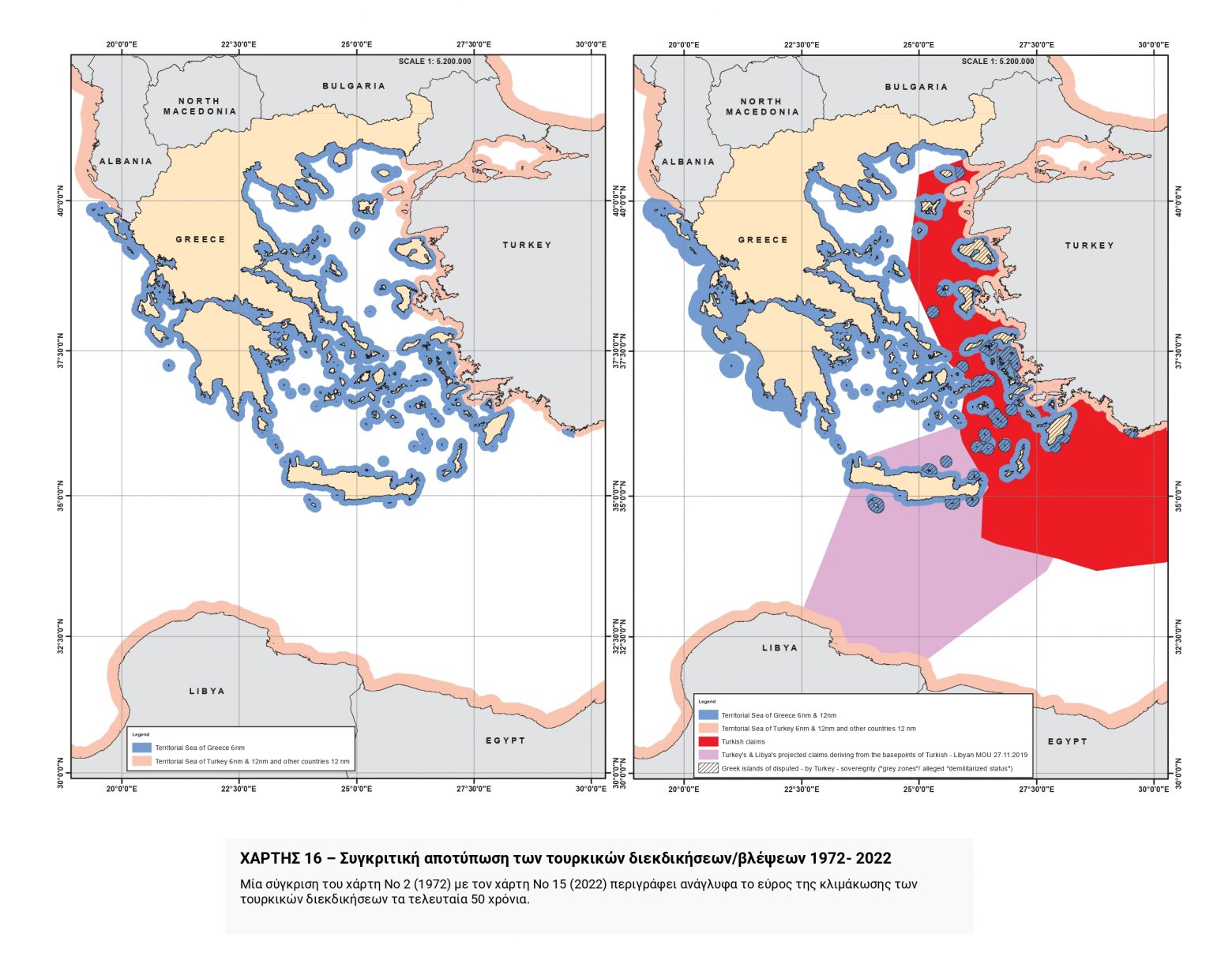 Through a comparison of Map No. 2 (1972) with Map No. 15 (2022), the extent of the escalation of Turkish claims over the last fifty years becomes crystal-clear.