Greece is full of museums that showcase the gems of Greece’s cultural heritage. From the Peloponnese in the south to Evros in the north, the country is home to a network of nine thematic museums that highlight Greece’s unique traditions.

The PIOP network of museums includes those below.

This impressive museum highlights the importance of water power in traditional Greek society.

Focusing on the main pre-industrial techniques that took advantage of rushing water to produce a variety of goods, the museum links these techniques to the history and daily life of the local society over the ages.

Visitors to the museum, which is located in the village of Dimitsana in Arcadia, a region in the Peloponnese, can tour the traditional workshops that are surrounded by lush vegetation and running waters.

The first building houses a fulling-tub and a flour mill. Outside the mill, a large cauldron is exhibited.

Across from the cauldron there is a tannery, where visitors can get to know the various stages of the leather-treatment process.

The cobbled road leads visitors from the museum to a gunpowder mill which emphasizes the role that Dimitsana played during the 1821 Revolution.

The Museum of the Olive and Greek Olive Oil in Sparta

The Museum of the Olive and Greek Olive Oil, in Sparta in the Peloponnese, transports you to the culture, history, and technology of olive and olive oil production in the Greek realm from prehistoric times to the early 20th century.

The museum’s objective is to highlight the ineffable relation of the olive with the identity of our country and, more generally, the Mediterranean basin.

The olive and olive oil are presented here from a multitude of angles: the economy, nutrition and the olive’s uses, religious worship, art, and technology.

The Environment Museum of Stymphalia

Situated on the banks of Lake Stymphalia, the largest mountainous body of water in the Peloponnese and the southernmost mountainous wetland in all of the Balkans, the Environment Museum of Stymphalia highlights the area’s impressive biodiversity.

The region, which belongs to the European Network of Protected Areas, or NATURA 2000, is home to unique flora and fauna, including a large population of migratory birds.

Stymphalia is also a significant location in Greek mythology, as a legend says that Heracles slayed the Stymphalian birds there as part of his twelve labors.

Featuring a large aquarium with native fish, digital models of the lake and wildlife habitats, the Environment Museum of Stymphalia helps bring awareness to the delicate ecosystem of the wetlands and portrays the inextricable connection of nature and mankind.

Museum of Marble Crafts in Tinos

The Museum of Marble Crafts in Pirgos on the island of Tinos is a unique example presenting the technology of marble, a material that holds a particular place in the architecture and art of Greece from antiquity through to the present.

The permanent exhibition, which describes the intricate meshing of tools and techniques used in working marble in a detailed and live manner, places an emphasis on the pre- and proto-industrial Tinos, the most important center of marble crafts in Modern Greece.

In parallel, it highlights the social and economic context in which the local workshops evolved.

The Chios Mastic Museum is located in the Mastichochoria (literally: mastic villages), a group of medieval villages in Southern Chios, the only site in the Mediterranean where the mastic tree, or Pistacia lentiscus, grows.

The Chios Mastic Museum aims to showcase the production history of the mastic tree’s cultivation and the processing of its resin, which it integrates into the cultural landscape of Chios.

Through the prism of UNESCO’s inclusion of traditional mastic cultivation on its Representative List of the Intangible Cultural Heritage of Humanity in 2014, emphasis is given to the diachronicity and sustainability of this product of Chios.

The Museum of Industrial Olive-Oil Production of Lesvos

This museum showcases the industrial phase of olive oil production in Greece.

It focuses on the changes brought about by the introduction of mechanical motion on the process of olive oil production and approaches the contribution of the region’s inhabitants to the production process with sensitivity.

Its objective is to showcase our industrial heritage in the sector of olive oil production and incorporate it into the broader architectural, social, and cultural context of the period.

They will also see the flour mill, which functioned in a complementary manner during the summer months when the olive press was out of use.

The Silk Museum in Soufli

The Silk Museum presents the different phases of sericulture, or silk farming, and silk manufacturing in detail and focuses on how the town of Soufli in Evros became a major silk-producing center in the late 19th through to mid-20th century.

At the museum, visitors will learn about all the details from each phase of which the cycle of sericulture is composed and discover the stages of silk manufacturing through authentic exhibits, supported by audiovisual material.

The Rooftile and Brickworks Museum in Volos

The Rooftile and Brickworks Museum is housed in a historic factory in Volos built in 1926 by Nikolaos and Spyridon Tsalapatas.

The massive complex, which covers approximately 5.44 acres, was one of the largest factories of its kind while active.

Displaying both the process and history of brick-making, an important product in the region, and the daily life of workmen who were employed at the factory, the Rooftile and Brickworks Museum provides a unique view into the history of Greek industry.

The factory remained empty after its closure in 1978 until it was purchased by the city of Volos in 1995.

The Piraeus Bank Foundation funded restoration work on the factory, converting it into an interactive, innovative museum, which was completed in 2006.

The Silversmithing Museum in Ioannina 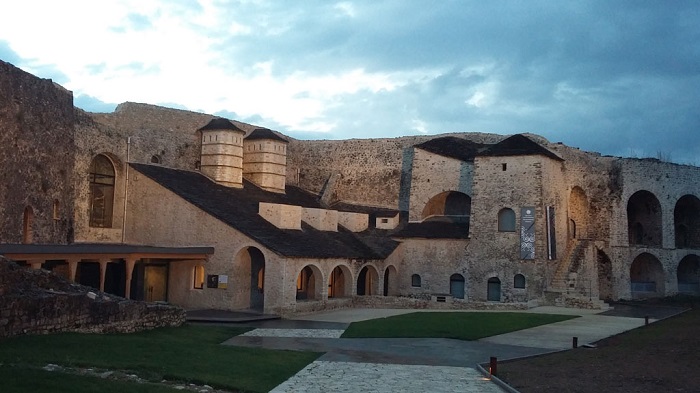 This museum is located in the castle of Ioannina, more specifically in the western fort of the northeastern acropolis.

It occupies the fort’s two levels, as well as the adjacent building with the old cookhouses.

Its objective is to preserve our knowledge of Epirote silversmithing and to disseminate information about its technology to the wider public.

The museum also aims to tie in this technology to the social context of the period during which it developed and flourished.

As a thematic museum, it concerns the technology of silversmithing during the pre-industrial period, while simultaneously acting as a regional museum as well, as it focuses principally on the history of silversmithing in the region of Epirus.

Temporally, the exhibition refers essentially to the post-Byzantine period from the 15th century onward but without excluding references to the more distant past, given that the technology used to produce silver objects dates back to much older periods of time.