Ellinopoula: The Unique Platform that Makes Greek for Kids Exciting

Ellinopoula, an award-winning digital platform, solves the problem for Greek diaspora parents and teachers who want their kids to learn Greek from the comfort of their home.

As we celebrate International Greek Language Day on February 9th, Greek diaspora parents worldwide face the challenge of how to pass on the Greek language and heritage to their children.

Ellinopoula is an award-winning e-platform that aims to give second and third-generation Greek kids the opportunity to learn the language in a fun and modern way by harnessing technology.

Platform director Anna Sakkis tells Greek Reporter that the platform is unique in that the whole purpose is to teach kids through entertainment, games, and beautiful educational activities.

Sakkis says that kids love their Greek heritage, but with second and third-generation Greeks and mixed marriages, Greek is often not spoken at home, and that creates a huge challenge for passing the language to children. Many parents want their kids to learn Greek but do not have the means or the time to devote to language lessons.

This is where Ellinopoula comes into play. Integrating learning Greek with Greek mythology, history, and culture in fun games, engaging videos, and interactive activities to inspire kids to learn Greek.

The platform’s innovative approach has led to its winning gold at the Education Leaders Awards for the past two years in a row. In 2021, it was recognized as the best Online and Distance Learning Platform, and also won gold awards for Digital Education and Innovation in Teaching.

The platform offers three different sections. One is a platform for children to learn Greek individually, another is a platform for Greek schools, and the third part is an online school with teachers who complement the platform with private tutoring and live online group classes.

“I don’t think there is any other organization or platform which combines all three like we do,” notes Sakkis.

Ellinopoula: Learning the Greek language and having fun too

Not only does Ellinopoula solve the very big problem of teaching the Greek language in a fun and entertaining way, but it has also created work opportunities for young, talented people in Greece.

“We do have a fantastic team of educators, designers, animators, software engineers, musicians, and many other talents that have come together in order to create this beautiful platform.”

As Dr. Katerina Lagos, Director of the Hellenic Studies Program at California State University recently stated “the program offers different approaches to learning – music, puzzles, and matching – that students today need. Ellinopoula has taken Greek language instruction to the new millennium, and it is wonderful to be a part of it.”

Teaching Greek once a week “is not enough for a child”

Supporting traditional Greek schools with a suite of tools for use inside and outside of the classroom has been a central focus of Ellinopoula since its inception. But for kids far from Greek schools, or even if they go to Greek schools, Sakkis says “it’s just once a week and many times they miss it because it’s snowing or it’s raining, or for any number of reasons.”

In any case, teaching Greek once a week is not enough for a child, according to the Ellinopoula director. “So even if a child goes to Greek school which does not use Ellinopoula yet, it also benefits them to have our platform because you need to create a habit. The way you eat every day, and when lunch comes around you know you need to eat, it’s the same thing with language – you have to engage in it daily.”

Ellinopoula stresses to parents that kids need to do at least five minutes a day of Greek language lessons. “A kid that gets to the platform will often be absorbed by it and stay longer and will not realize they’re learning Greek at the same time.”

Many parents living far away from Greek schools, in the US and in other countries, have expressed their gratitude to the Ellinopoula platform for keeping the Greek language alive.

Melissa McLamb, who lives in rural Oklahoma, states: “Ellinopoula has been a lifesaver. When I tell my daughter ‘no screen-time’ and I’ll catch her with the Kindle, and then I listen, it’s Ellinopoula! It’s absolutely fantastic, she’s saying Greek words while we’re doing our things…the amount of Greek that she has learned, and the enthusiasm she still has – and we’re 3-4 years in — is remarkable!” 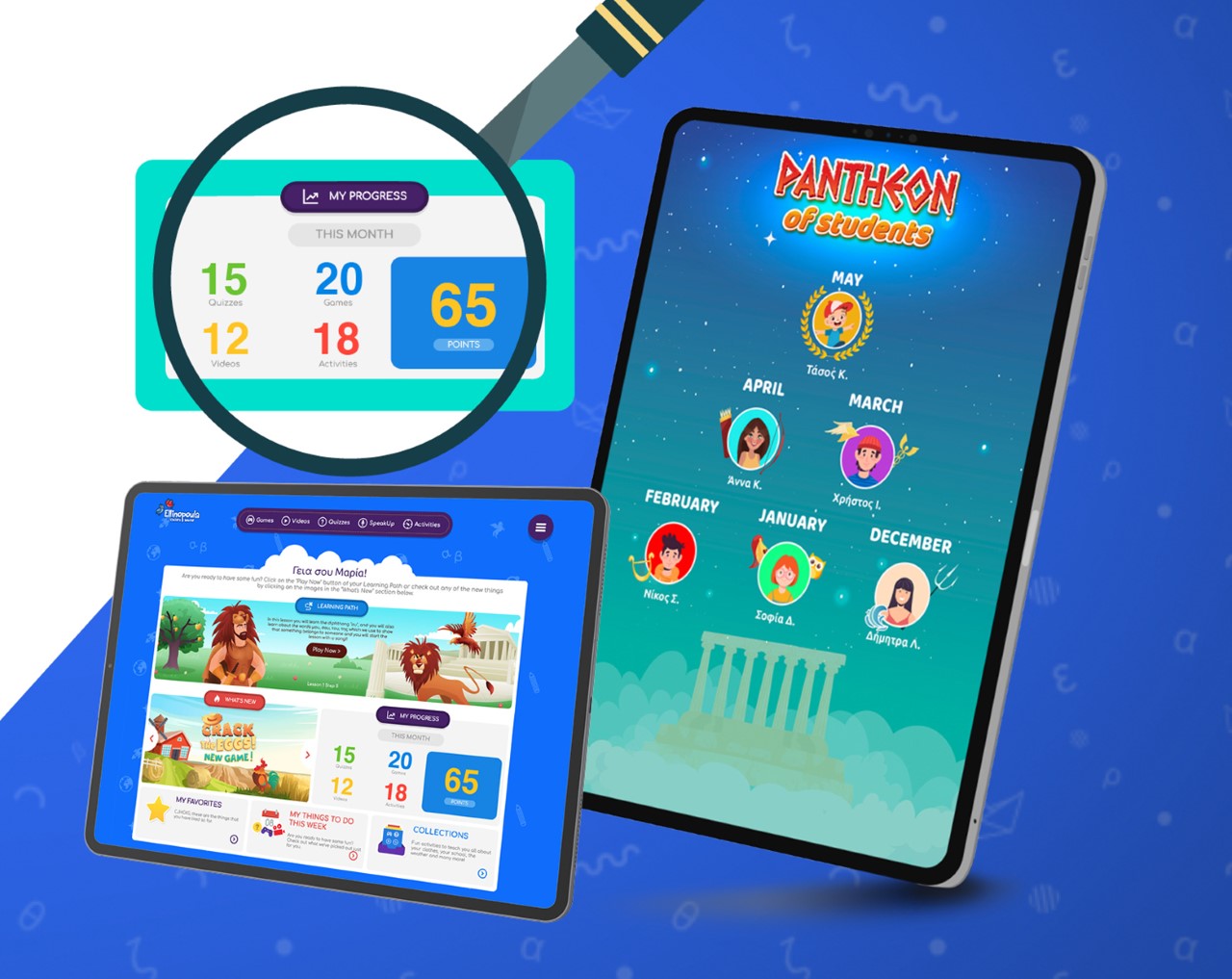 In Milan, Italy, Katerina Thalassochori has put both of her daughters on the platform: “As a Greek mother, I try to pass on the complete Greek heritage to my children. Something I can’t pass on is a Greek school – that’s where Ellinopoula comes in and offers that. Apart from the language, children learn about our Greek heritage. My younger daughter goes onto the Ellinopoula platform and learns by playing games and is very proud that after finishing each lesson she comes and speaks Greek to me”

Ellinopoula also offers special classes for parents who do not speak Greek. Sakkis notes: “For any students, we can take them from not knowing a word of Greek, all the way through to Ellinomatheia certification, which is a strong level of proficiency in the Greek language.”

Case in point is Alenah Tsutras who is learning Greek on Ellinopoula, together with her daughter. Alenah’s daughter Sofiah says: “We learn so many new things, like different colors, different animals, but they have it in English writing and Greek writing, so we know what they’re saying,”

Ellinopoula merges teaching the Greek language with understanding Greek culture and history. ”For us, it is a passion, and it’s not only the language but it is also Hellenism,” Sakkis notes.

“Our platform and our live classrooms merge the two in a wholesome way, in that we try to inspire the kids to love Hellenism while they’re learning Greek, and this is very important for us,” she tells Greek Reporter.

Ellinopoula teaches children all over the world. Apart from the US, pupils come from all over Europe, Canada, Australia, the United Arab Emirates, Hong Kong, Singapore, China, India, and many other countries.

“Anywhere in the world where there are Greeks, we have students. We love them all. It’s so beautiful to have a class where a child from New York is learning with a child from India or from the UK, or Romania, or Italy; it’s fantastic. We connect the world, we bring it together,” Sakkis says.

Mrs Sakkis also stresses how important the diaspora Greek schools are for Ellinopoula – she states: “We also created Ellinopoula to enable teachers and Greek schools to have wonderful tools to optimize learning. We do this with a range of features including a homework builder, grammar tools, progress reports, assessment tests, and many others.”

Furthermore, Ellinopoula’s director is constantly training teachers on how to use modern tools and adopt new digital ways of teaching. “Now that I’m in Greece, I train teachers in Australia and the world that is ahead of Greek time in the mornings, and in the evenings, I also train teachers who are in the US and Canada.”

Teacher Nasa Theofanis from Victoria in Australia, states: “after a semester of teaching Ellinopoula to students, the response was very positive. Most students, especially the younger ones, love the program.”

Dr. Lagos, who runs the Annunciation Greek School in Sacramento, says that she has received much positive feedback from parents since the school adopted the platform, as students now enjoy doing the homework.

In addition, she values its flexibility: “What I really like is that I can customize the homework. If I have a particularly advanced student, I can actually give some challenge exercises. For those that need a little extra boosting, I can provide some remedial exercises. In that way I can do differentiated learning with my classes, and this applies to every single student in the program…It complements everything I’m doing in the classroom!”

The challenges for the Greek language outside of Greece are many, but it is clear that the Ellinopoula platform is making a difference. As Sakkis reflects on her experience, “we know the Greeks that live abroad, and we know that they love Greece, as we do, and we all want to keep the Greek language alive for our children.”