Mikis Theodorakis, the greatest Greek composer in history, whose music has touched generations, died on Thursday at age 96 in Athens.

His death at his home in central Athens followed multiple hospitalizations in recent years, mostly for heart treatment.

The composer penned what is probably the best-known piece of Greek music, the film score to “Zorba the Greek,” an instrumental which is still played and danced to around the world to this day.

Mikis Theodorakis produced a staggering number of musical works, encompassing both symphonic music and most predominantly Greek folk music, from which he drew most of his inspiration, making it famous the world over.

His ability to compose music which conveyed emotion and struggle is perhaps best displayed in his composition “The Ballad of Mauthausen.” This music has been described as one of the most beautiful pieces of music ever written about the Holocaust.

The legacy which the incomparable Theodorakis leaves behind is not only that of the greatest Greek composer of all time, but also that of a visionary humanitarian. Starting out as a socialist, in his later years he tried to unite all the Greek people, regardless of their political affiliation.

Mikis Theodorakis suffered a great deal for his early idealism, even enduring torture multiple times, beginning when he was captured during the Italian occupation. He was later imprisoned and exiled for his beliefs, even after he had achieved acclaim as a composer.

But like all great creators, he transformed all his painful experiences into tremendously moving works of art. The end result was that Theodorakis made his personal history part of the musical history of the nation of Greece.

One cannot separate Theodorakis’ political activism from his compositions, because one is the reflection of the other. Even in his nineties, his creative spirit was strong, and he remained active in both fields.

No Greek can forget his moving speech during the rally against the use of the term “Macedonia” by Greece’s northern neighbor, on February 4, 2018. 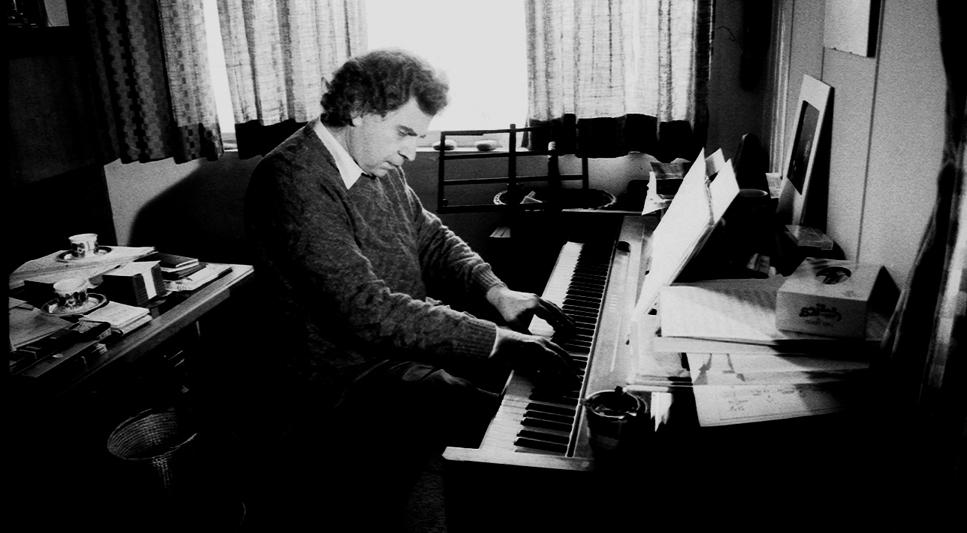 Early life of Greece’s greatest composer of the modern era

Mikis Theodorakis was born on the island of Chios on July 29, 1925. But his most salient characteristic, that of the restless spirit which no shackles could ever contain, was perhaps derived from his Cretan descent.

For most Greek people, Theodorakis was seen as a revolutionary who spoke through both his actions and his music. For the rest of the world, he was a notable composer who also became famous for the iconic music he wrote for the film “Zorba the Greek.”

It was clear from early on that the composer’s life would be equally devoted to both music and the struggle for human rights. Theodorakis gave his first concert in Tripoli, at the tender age of 17, presenting his work “Kassiani,” a piece of classical music which expressed the horror and grief of the German occupation of Greece.

It was 1942; and in addition to being completely devoted to his music, young Theodorakis had also already joined the Greek Resistance, fighting the Nazis.

The composer was only 18 when he was arrested for the first time, during a demonstration on March 25, 1943. The occupying Italian forces brutally tortured the young man; but this was only the first time that he would be treated in this inhumane way.

When Theodorakis was released, he moved to Athens and joined the National Liberation Front (EAM) and began his studies at the Athens Conservatory.

After the German Occupation, Greece fell into the abyss of a bloody civil war. The idealistic young composer found himself sympathizing with the leftist guerrillas. He was persecuted by police and ended up living in hiding in Athens.

After second torture, sent to prison camp on Makronisos

Eventually Mikis Theodorakis was arrested, was tortured again, and then sent into exile on Greece’s Ikaria Island. He was later transferred to Makronisos, a barren island which was made into a camp for political prisoners.

The prisoners were known to suffer torture and had to endure unimaginable living conditions. The inmates called it a “death camp,” as many of them perished there.

Theodorakis was released from the camp after the end of the Civil War. He moved to Athens, where he completed his studies at the Athens Conservatory. His special area of study was in “Harmony, Counterpoint and Fugue.” He was then finally free to begin a promising music career.

In 1954, armed with a scholarship, he moved to Paris, where he enrolled in the Paris Conservatoire, studying music analysis with Olivier Messiaen, and orchestral conducting with Eugene Bigot. The years between 1954 and 1960 were a time of feverish music composing all over Europe.

He wrote music for the ballerina Ludmila Tcherina and for the Stuttgart Ballet. In 1957, Theodorakis was awarded First Prize at the Moscow Festival by Dmitry Shostakovich for his work “Suite No. 1 For Piano and Orchestra.”

The composer also wrote many works of symphonic music and chamber music during these years.

Upon his return to Greece in 1960, Theodorakis’ music became political, in line with his leftist ideology. He had already taken the long poem “Epitaph” by Yiannis Ritsos and put it to music. He now turned to writing folk songs, composing dozens of songs which still echo in the minds of the Greek people.

Theodorakis founded the “Athens Small Symphony Orchestra” and performed many concerts all over Greece as part of a campaign to familiarize Greek citizens with the masterpieces of European symphonic music.

In 1964, the composer gained instant worldwide recognition with the iconic music he wrote for Michael Cacoyannis’ film “Zorba the Greek.”

Elected to Parliament as member of United Democratic Left party

April 21, 1967 was a black day for Greece, and it was doubly so for the leftist-leaning composer. He went underground in order to fight against the Greek dictatorship, but only a few months later, he was arrested and thrown in jail.

Theodorakis’ descriptions of the torture and humiliation he suffered by the authorities under the dictatorship are very difficult to read. Theodorakis was transferred multiple times to other prisons and special concentration camps for political dissidents.

Continued to compose even after arrest during Colonels’ regime

Still, despite the horrendous events he was living through, Mikis Theodorakis never ceased to compose music, continually sending his compositions abroad so that they would not be lost. The singers Maria Farantouri and Melina Merkouri, who were both self-exiled in Paris, sang his songs to tell the world of the terrible events unfolding in Greece.

Theodorakis’ health began to deteriorate while he was detained at the Oropos camp, and both Greek and foreign luminaries protested abroad for his release. Among them were composer Dmitry Shostakovich, playwright Arthur Miller, and actors Laurence Olivier and Yves Montand, who set up an international committee demanding his release.

Under incredible international pressure, the dictators had no option but to release Theodorakis, allowing him to leave the country on April 13, 1970. He would use France as a base for the next four years, as he continually toured the world and agitated for political reforms and human rights.

The composer felt a lifelong responsibility to compose music which would speak for freedom, human dignity and human rights. He made his personal goals universal.

Once free, Theodorakis spent every moment of his life during those years staging concerts, meeting with heads of state and important figures, giving interviews and making statements, imploring the world to help topple the colonels’ regime in Greece.

In 1974, after the fall of the dictatorship, the composer finally felt free to return to Greece. Greeks were hungry not only for freedom but for Theodorakis’ music as well, which had been banned during the seven years of the colonels’ regime.

He gave many concerts in Greece and abroad and was again placed on his rightful pedestal as one of the most important Greek citizens in modern history.

The indefatigable creator still never stopped composing, even when he was actively involved in Greek politics. He was elected to the Greek parliament in 1981-86 and 1989-92, and served as Minister of State from 1990-92 in the Constantine Mitsotakis administration.

Theodorakis’ decision to join the right-wing government was openly derided by the leftists. However, the move showed his longing to unite all Greeks and erase the political differences which had caused the civil war.

The composer was awarded the Lenin Prize for Peace in 1983. In 1986, Theodorakis, along with Turkish intellectuals and politicians, was instrumental in the establishment of Greek-Turkish Friendship Committees in Greece.

Nominated for Nobel Peace Prize in 2000

He then held several concerts in the neighboring country in an effort to bring the peoples of the two countries together. Creating and playing the role of an ambassador for peace, he sent messages from Prime Ministers Andreas Papandreou, and later Constantine Mitsotakis, to the Turkish government.

Theodorakis was nominated for the Nobel Peace Prize in the year 2000.

Still, despite his work as a full-time activist for many causes in the realm of peace and human rights, Theodorakis kept composing symphonic music, cantatas and operas. He publicly opposed NATO’s war in Kosovo in 1999 and the Iraq War in 2013.

During these years, he received many international awards and honors, both for his music and his activism for peace and human rights.

Theodorakis and the issue of “Macedonia”

The last time Theodorakis was politically active was after Alexis Tsipras’ leftist government signed a deal with the Former Yugoslav Republic of Macedonia to allow the use of the term “Macedonia” by Greece’s northern Balkan neighbor.

On February 4, 2018, hundreds of thousands Greeks gathered at Syntagma Square in Athens to protest against the use of “Macedonia” in FYROM’s official name — which of course has now been changed to The Republic of Northern Macedonia.”

The great Greek gave a staggering speech there defending the name of Macedonia, coming close to tears.

“Macedonia is and will always be Greek,” he stated. “The position of the Greek people is firm and self-evident. If a government is considering to put its signature to a deal that includes the term Macedonia, then it must ask the Greek people first.”

Defying previous accusations by the government that those who defended the name of  Macedonia are “nationalists” and “right-wing extremists,” Theodorakis declared, “It is not nationalism, but patriotism to defend the homeland and its people.”

Among all the innumerable other qualities possessed by the great composer and humanitarian, Theodorakis showed his deep and unending devotion to his beloved nation of Greece to the very end of his life.

His long life encapsulated all the trials and tragedies — and eventual rebirth — of Greece in modern times.