Greece Toughens Restrictions on the Unvaccinated

Greece toughened its stance towards the unvaccinated on Tuesday by unveiling a raft of new public health safety measures that go into effect on September 13.

According to the new rules:

The measures will remain in force until 31 March 2022.

“These measures are not punitive [against the unvaccinated]”, Health Minister Vassilis Kikilias said.

“They are our duty to all those who went through 18 months of the pandemic carefully, those who lost their shops, jobs, had to work from home to protect themselves,

“Unlike in autumn last year, when humanity was confronted with Covid-19 without other defenses apart from the known protection measures, this autumn each of us can protect themselves and protect others. Vaccines have been available for eight months, giving us a choice that we did not have before,” he added.

Kikilias said that hospitals will no longer treat Covid-19 as a priority but serve patients with every kind of ailment and he underlined that vaccinations must continue in order to reach the 80 percent vaccination rate, which meant that another one million citizens needed to be vaccinated.

He added the measure for the suspension of unvaccinated healthcare workers will go ahead in September as planned and that mandatory vaccination concerns both the private and public healthcare sector, including private doctors and pharmacists.

Greece has one of the largest share of unvaccinated people in Europe, according to the table below. As of August 22, 54 percent of all adult Greeks were fully vaccinated, compared to a EU average of 56 percent. Portugal, Spain and Denmark have the highest share of vaccinated against Covid-19. 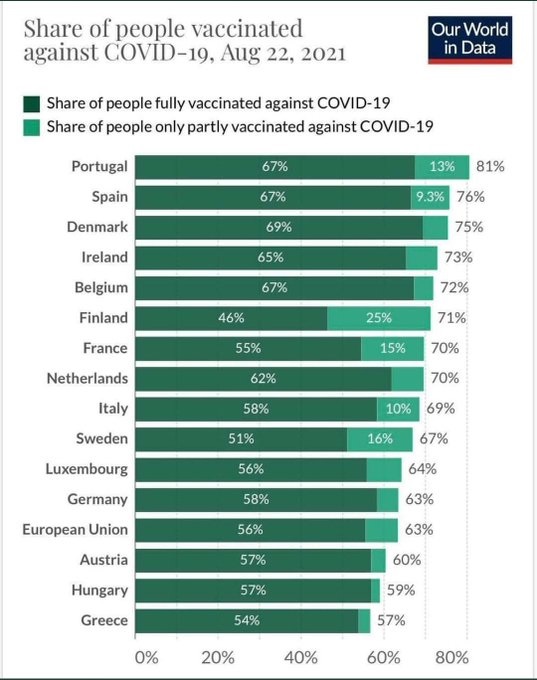 Health workers in Greece to strike against compulsory vaccination

The union representing Greek public hospital staff is planning a strike and a rally in downtown Athens on Thursday to protest the mandatory vaccination of healthcare workers against Covid-19.

The strike called by POEDIN will run from 10 a.m. to 3 p.m., with protesters expected to gather in front of the Health Ministry at 11 a.m.

POEDIN has also called on its vaccinated members not to submit their immunity certificates to the authorities to prevent the creation of a register showing which healthcare workers have been vaccinated against the novel coronavirus and which have not.

Health workers who refuse the shot face suspension without pay.

POEDIN claims that the law making vaccination compulsory for all health workers will only put additional strain on the public healthcare system by creating more staff shortages.