Over 25 of the most powerful US Senators and Members of Congress for US foreign policy will be speaking at the 36th Annual PSEKA Cyprus Conference on July 20.

Cyprus Foreign Minister Nikos Christodoulides will be joined by Speaker of the House Nancy Pelosi, the Chairmen of the Senate and House Foreign Relations/Affairs Committees Bob Menendez and Gregory Meeks, American Jewish Committee CEO David Harris, as well as Prime Minister of Greece Kyriakos Mitsotakis and Archbishop of America Elpidophoros and others by video. 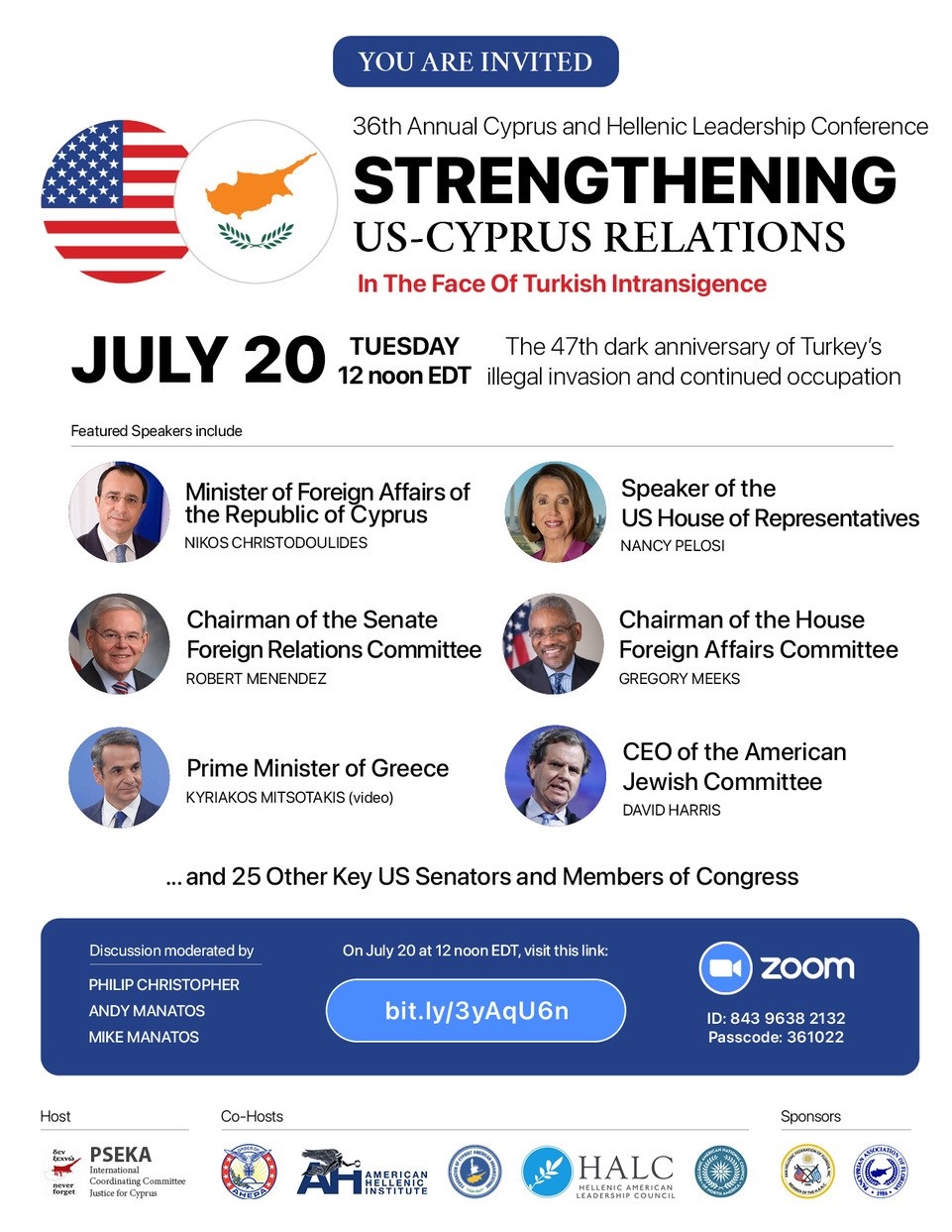 It will be viewed by hundreds around the world online on July 20, beginning at 12 noon EST on zoom here

The theme of this year’s conference is “Strengthening US-Cyprus Relations in the Face of Turkish Intransigence” at it will be held on the 47th dark anniversary of Turkey’s illegal invasion and occupation of Cyprus.

PSEKA or the International Coordinating Committee – Justice for Cyprus was founded in 1975, one year after the Turkish invasion, and its aim remains the pursuit of a just and viable solution to the Cyprus problem.

The Conference also takes place on the day Turkish President Recep Tayyip Erdogan plans to visit the occupied territories of the Mediterranean island.

Erdogan described the anniversary as a “celebration of peace and freedom,” and promised to send a “strong message to the whole world” that Turkey will support the rights of the self-declared state of the Turkish Cypriots, which is not recognized by any other nation in the international community.

High-ranking Senators asked President Biden on Wednesday to utilize both bilateral and multilateral channels to pressure Turkey to halt its provocations in Varosha, Cyprus.

In the bipartisan letter to the White House, the Senators say that Turkey is planning to open Varosha in Cyprus, which has remained deserted since the Turkish invasion of 1974, in contravention of several United Nations Security Council (UNSC) Resolutions.

The Senators urge the Administration to put to pressure on Turkey to halt its provocations in Varosha and to clearly articulate the consequences of Turkey’s illegal actions.

“We are concerned about developments on the ground in Varosha,” he said. He recalled that the EU, through the European Commission and European Council presidents, has repeatedly reaffirmed the status of Varosha “and called for the Turkish authority, not to create a situation that could be against the United Nations decisions”.